HANOI (Vietnam News/Asia News Network): President Nguyen Xuan Phuc pledged to create favourable conditions for investors while meeting with leaders of South Korean firms which were implementing large-scale projects in Vietnam on Monday (Dec 5) in Seoul as part of his three-day visit to the country.

Receiving Kyung Shik Sohn, chairman and CEO of CJ Group, Phúc highly appreciated the group’s implementation of its commitments when investing in Vietnam in food and animal feed production, biology, logistics and culture.

CJ now has 24 subsidiaries operating in eight sectors in Vietnam with a total revenue of US$1.5 billion, a 10-fold increase in the past 10 years.

Phúc urged CJ to further expand investment in Vietnam and turn the country into a global production and business base. He also expected CJ to consider moving the headquarters in South-East Asia to Vietnam to be able to take advantage of the opportunities of free trade agreements to which Vietnam was a member and actively bring Vietnamese goods to the world market.

For his part, Sohn said that for many years, the group had properly implemented its investment commitments on clean food production and biotechnology in Vietnam, turning Vietnam into the third largest out of 30 markets of CJ in the world.

He stressed that Vietnam would become CJ’s production and business base in South-East Asia.

At the meeting with Lotte chairman and CEO Shin Dong-bin, Phúc affirmed that Vietnam always created favourable conditions for Lotte to expand business and continue its success in Vietnam.

He applauded Lotte for starting the construction of a major urban project in HCM City in early September and Lotte Mall Tây Hồ which would be operational from August 2023.

He urged the group to study the investment in building a modern trade centre and urban area in Long An Province.

Phúc stressed that the management agencies in Vietnam would cooperate with the group to ensure the harmonisation of interests between the two sides and create the best conditions for Korean firms to create new imprints in Vietnam.

Phúc said he expected LG would increase its investment in Vietnam, especially in sectors of strength such as automotive and mobile phone equipment, information technology training and software centre.

Phúc hoped LG would set up its main and largest production centre in Vietnam, pledging to create the best environment and infrastructure for the investors.

LG had invested in Vietnam since 1995 with a total investment of $5.3 billion in a variety of sectors. LG would invest another $4 billion in Vietnam and planned to turn Vietnam into a production centre of cameras for phones, Bong-seok said

While meeting with chairman of Daewoo E&C Jung Won-ju, Phúc expected the group to invest in building large hospitals in Vietnam to meet the healthcare services demand of the country of 100 million people together with investing in infrastructure, oil and gas and smart city.

Emphasising that the investment in the Star Lake smart urban area would be a highlight, Won-ju said that Deawoo wished to invest more in Vietnam, especially in oil and gas, green growth, environment and community development.

Highly appreciating Huyndai Motor’s investment in Vietnam, Phúc urged the group to enhance cooperation with Vietnamese enterprises and further promote the part-supply industry in Vietnam while meeting with the group's CEO Chang Jae-hoon.

Phúc welcomed the group’s investment in producing electric vehicles in Vietnam, adding that he would direct relevant ministries and agencies to study policies of tax and infrastructure development to encourage the use of electric vehicles.

Jae-hoon, for his part, expressed his wish to expand investment in the production of electric cars in Vietnam to not only serve the Vietnamese market but also all of Asia.

In response, Yong said that the group was striving to implement several urban areas in Vietnam and hoped to promote education infrastructure in the southern part of HCM City through the development of internationally affiliated schools.

While meeting with Yeonin Jung, CEO and chairman of Doosan, Phúc expressed hope that Doosan would jointly build green and clean energy solutions and support Vietnam in realising its sustainable development goals. ‘

Phúc also received the group of partners of Saigontel lead by Kang Hoon Lee, Chairman of the Korea Overseas Infrastructure and Urban Development Corporation (KIND) under the South Korean Ministry of Land, Infrastructure and Transport. 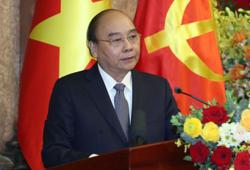 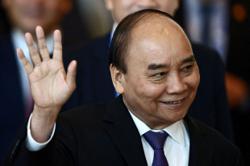