Beijing: Chinese scientists will push the frontier of basic sciences and create new innovations to help the world achieve its sustainable development goals.

Since then, over 100 organisations across the world have held events recognising and celebrating the role of basic research to achieve the sustainable development goals by 2030.

Particle physics is one of the fields in basic sciences that Chinese scientists have contributed in recent years, said Wang Yifang, director of the Institute of High Energy Physics of the Chinese Academy of Sciences.

Particle physics may seem like an abstract subject that people find difficult to understand and relate, but it has yielded many critical innovations, including the Internet, nuclear power plants, and medical device used to diagnose and treat cancers, experts said.

Chinese scientists are also making strides in the research of neutrinos, the most abundant particles in the universe yet it hardly interacts with anything due to its extremely small mass and no electric charge, hence its nickname the “ghost particle”.

The Daya Bay Reactor Neutrino Experiment, located in Guangdong province, discovered new properties on the oscillation of neutrinos in 2013. The finding sent a shockwave through the international physics community.

Wang said China is building an even bigger neutrino experiment called the Jiangmen Underground Neutrino Observatory. It is set to complete next year. — China Daily/ANN 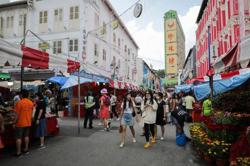