Just like within Asean, response is split within Indonesia on how to address the Myanmar coup. - AFP

YANGON/JAKARTA, Dec 5 (The Straits Times/ANN): Indonesia must take a stronger approach to tackle the Myanmar crisis, analysts say, now that it has taken over from Cambodia as the chair of Association of South-East Asian Nations (Asean).

Leaders at the 40th and 41st Asean summits in Phnom Penh, Cambodia, on Nov 11 have maintained that the “five-point consensus” peace deal on Myanmar “shall remain our valid reference and should be implemented in its entirety”.

While the objectives such as halting violence, facilitating inclusive dialogues, delivering humanitarian assistance, appointing a special envoy to mediate, and visiting Myanmar to “meet all parties concerned” are clear, the strategy for implementation is not, analysts say.

Take the case of the special envoy of Asean chair, which changes every year when the chairmanship of the 10-nation bloc rotates. There have been two so far: Cambodia’s Foreign Minister Prak Sokhonn and Brunei’s Second Foreign Minister Erywan Yusof.

“We need a special envoy of Asean, not an envoy of the Asean chair,” he noted.

“It is not going to work if Asean changes envoys every year. So, unless and until these and other problems are fixed, no chair could ever hope to do things differently,” he added.

Since the Myanmar military seized power in a Feb 1, 2021 coup, Indonesia has been an outspoken voice against the violence, which has left more than 7,000 civilians dead and displaced over one million people.

That same month, Foreign Minister Retno Marsudi employed “shuttle diplomacy” to rally a collective response from various countries in the hope of ensuring stability in the region, travelling to Brunei, Singapore, and Thailand.

In Bangkok, together with her Thai counterpart Don Pramudwinai, she met the junta-appointed representative Wunna Maung Lwin to discuss the crisis.

Her efforts led to a virtual informal foreign ministers’ meeting on March 2 which included a discussion of Myanmar. She called for dialogues among affected parties to resolve their differences peacefully.

Shortly after, in an Asean meeting in Jakarta on April 24, President Joko Widodo spoke out against the military violence, saying: “Violence must be stopped. Democracy, stability and peace in Myanmar must return immediately. The interests of Myanmar’s people must always be a priority.”

The president and his minister have reiterated similar remarks since. As Asean’s current chair, Indonesia must ramp up pressure on the junta, analysts say.

Just like within Asean, response is split within Indonesia on how to address the Myanmar coup. Some felt Asean should not intervene in Myanmar’s domestic issue, while others concurred with Mr Widodo and Ms Retno that the crisis must be resolved as soon as possible to maintain Asean’s centrality and power.

Indonesia has previously indicated its openness to engage various stakeholders, including the military regime and the National Unity Government, which comprises ousted parliamentarians and allied pro-democracy groups.

Indonesia’s Foreign Ministry director general for Asean Cooperation Sidharto Suryodipuro had said there was no need for a permission from the junta.

Dr Rizal said Asean should also engage the National Unity Consultative Council, which comprises a broad group of Myanmar stakeholders opposed to the military regime, and is helping to shape a federal democracy for Myanmar, as well as ethnic groups and civil society organisations.

Further, he proposed that Asean suspend Myanmar’s membership and bar the junta from taking part in all Asean meetings. In the meantime, the seat for Myanmar should be vacant until and unless all stakeholders agree to Asean-proposed “all inclusive dialogues”.

“We need to do these. We need to send a clear message to the junta: they should not take Asean for granted,” said Dr Rizal. He added that the Asean Intergovernmental Commission on Human Rights, as well as human rights groups in some member countries could also collaborate to document human rights abuses in Myanmar.

Indonesia could adopt a persuasive approach, including starting a military-to-military engagement with Myanmar to convince the junta that civilian rule does not necessarily mean shoving the military into the shadows. However, some compromises must be made, political analyst Makarim Wibisono said.

Prof Makarim said: “Giving everyone equal opportunity is key. Political parties in Indonesia welcome former generals in the government provided they are no longer active.”

Indonesia’s military began its reform after former authoritarian President Suharto resigned in 1998 after 32 years in power, handing the reins to his deputy Jusuf Habibie.

During Suharto’s era, the Indonesian Armed Forces, or TNI, prescribed the dwifungsi, or “dual function” doctrine, in socio-political life. Not only did it keep law, order, and stability, but was also deeply involved in governance.

As the country transitioned to democracy the military was forced to stay out of politics and gave up its reserved seats in the parliament. Military officials who want to run for elections must first resign from their posts.

Prof Makarim said keeping Asean unity and consensus is important, and is optimistic that Myanmar junta will eventually accept Asean’s call for dialogue. He hopes that the stakeholders which Indonesia will engage will use the forum to share experiences and concerns.

He said: “The government led by Aung San Suu Kyi is as strong and firm as the military junta. The challenge is for Indonesia to find a way to get them to speak the same language and hopefully find a middle ground. ” - The Straits Times/ANN 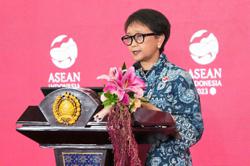