The Electricity Generating Authority of Thailand (Egat) last week donated another 500 sets of interconnected porcelain insulators to the Department of Marine and Coastal Resources. They will be dropped into the seabed where they can be used by coral to form new reefs.

The latest batch of insulators will be used to create artificial coral reefs in the Andaman Sea, off Phuket province’s Mai Thon Island.

The structures serve as frames for coral to grow on, and attract fish that use them – like natural coral reefs – for resting spaces and breeding grounds.

Egat deputy governor Somkiat Panuschai said that the agency has contributed to many projects to build “fish houses” in several coastal provinces, including Prachuap Khiri Khan, Pattani, Narathiwat, Chon Buri, and Phuket. It has already donated more than 3,600 sets of insulators to serve as artificial frames for coral to grow on, he said.

High temperatures bleach algae cells on coral, which prevents their growth. Since most fish find shelter and reproduce in the nooks formed by coral reefs, their loss leads to a decline in marine life.

According to research by Prince of Songkla University, porcelain insulators do not damage marine life or the quality of seawater.

Paitoon Panchaiyaphum, a director at the Department of Marine and Coastal Resources, said that recent surveys by divers found that coral is growing well on structures made from Egat’s porcelain insulators.

The artificial reefs have become feeding grounds for many fish and other aquatic life, Paitoon said, adding: “This is a good sign for improving the diversity of marine life long-term.” 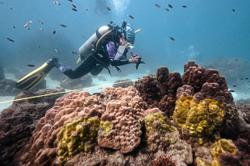