SHANGHAI, Dec 2 (Bloomberg): Customs officials in China have arrested a woman smuggling semiconductors inside a pregnancy prosthetic, highlighting the bustling underground market for chips that has sprung up in the world’s No. 2 economy.

The woman was stopped while crossing into Zhuhai from Macau on Nov. 25, customs said in a statement on Thursday, adding she was found with 202 processors and nine smartphones.

An officer at the border cross became suspicious when she questioned the woman, who claimed "she was about five or six months pregnant, but had a big belly that looked like she was in the third trimester.”

An underground market for semiconductors has sprung up in China since 2020, when a global shortage of chips started disrupting supplies of everything from smartphones to vehicles. A move by the US to impose sweeping curbs on exports of high-end semiconductors and chip-making equipment to China, partly to stop them being used for military purposes, has further roiled the market.

China’s massive gray market is made up of hundreds of middlemen and is riddled with second-hand or out-of-date chips that can fetch prices 500 times the original cost.

Apple Inc.’s iPhones are typically smuggled into China because they are more expensive there than in Hong Kong and Macau due to import taxes. Smugglers are occasionally caught at the border with dozens of the devices. - Bloomberg 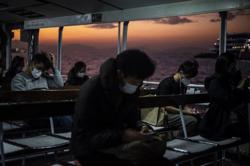