KUALA LUMPUR, Nov 26 (Bernama): The ringgit is likely to revisit the 4.46 level next week, last seen in August as market mood continues to be lifted by renewed interest rate hopes and optimism about the new government.

"The market views the Pakatan Harapan leader as market-friendly.

"Parliament will prioritise approving the budgets for the government’s short-term operating expenses and will aim to table Budget 2023 in a month or so after that,” he told Bernama.

Nevertheless, Innes said that during the week, the market will see a heavy calendar of Federal Reserve speakers, including speeches from New York Fed president John Williams and St Louis Fed president James Bullard on Nov 28.

Fed chair Jerome Powell will speak about the economy and the labour market on Nov 30.

The "second" estimate for the third quarter of the US gross domestic product (GDP), based on more complete data, will be released on the same day.

"They will remain hawkish, trumpeting the Fed’s inflation-fighting credentials. So this could hold back the ringgit early in the week, given how quickly we have come on the rally front.

"But since I think hawkish Fed speak is a low bar to hurdle given the downtrend in US inflation, the ringgit could trade even stronger towards the end of the week,” he noted.

The ringgit kicked off the week just ended on a weak tone as the first-ever hung parliament outcome in Malaysia from the 15th General Election (GE15) held last Saturday shook investors’ confidence.

The market made a turnaround and rallied as much as 1.8 per cent to its highest in over two months versus the US dollar on Thursday with the appointment of Anwar as the new Prime Minister, thus easing the political uncertainty.

The local currency was the best-performing currency in Asian on Thursday, also boosted by continued hope that price pressure has started to ease, with the Fed’s November meeting minutes pointing interest rate hikes may slow soon.

The local note was also traded mostly higher against a basket of major currencies. 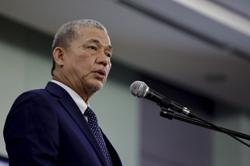