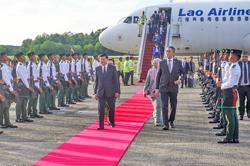 Thongloun, his wife Naly Sisoulith and a delegation of Lao officials arrived in Bandar Seri Begawan on Monday for the state visit at the invitation of the Bruneian king, the Lao Ministry of Foreign Affairs said in a press release.

It marks Thongloun’s first visit to Brunei Darussalam as the president of Laos.

During talks held shortly after an official welcoming ceremony at the Istana Nurul Iman Palace on Tuesday, Sultan Hassanal warmly welcomed the Lao president and his delegation.

The two leaders said they highly valued the friendly relations and cooperation between their countries in fields ranging from politics to human resource development, and socio-cultural and economic spheres.

The leaders discussed future cooperation to bolster their longstanding relations and cooperation and witnessed the signing of two memorandums of understanding on cooperation in agriculture and energy.

Next year, Laos and Brunei will celebrate the 30th anniversary of their diplomatic ties and will jointly organise events to mark the occasion.

The leaders briefed each other on developments in their respective countries and exchanged views on regional and integrational issues of mutual interest.

Thongloun told Sultan Hassanal that Laos stands ready to work with Brunei and other members of Asean, the 10-member regional bloc of which Laos and Brunei are members, to strengthen the Asean community. In this regard, Laos will assume the Chairmanship of Asean in 2024.

The Lao leader noted that the initiative to establish the Asean Centre for Climate Change in Brunei will play an important role in tackling the effects of climate change.

He also invited business operators in Brunei to explore investment opportunities in Laos, which has investment potential in the fields of agriculture, energy and tourism. 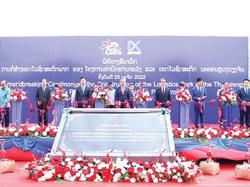