National Police Chief, Damrongsak Kittiprapat (third left), speaking with rescue workers at the nursery following a mass shooting in the northern Thai province of Nong Bua Lam Phu. A former police officer stormed a nursery in Thailand on Oct 6, shooting dead more than 30 people, most of them children, before killing himself and his family. - AFP

* Annuar Musa: Cabinet meeting on Oct 7, so Parliament not dissolved

* Selangor Sultan: Rights of non-Muslims must be considered in religious decisions

* A-G's report: Nearly half of 1,091 loans given by govt in arrears, some never serviced at all

* MetMalaysia: North Sumatra hit by quake, tremors may be felt in parts of Malaysia

* M'sians can now nominate themselves to contest GE15 for PKR, says Rafizi

* 'A time to help': Indonesians ran to aid of fleeing fans in stadium stampede

* We will make Philippines a major agriculture hub: Marcos

* Six killed, many injured as vehicle overturns in Myanmar 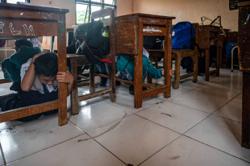