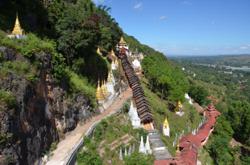 MYEIK (Myanmar), Oct 3 (Eleven Media Group/ANN): The Thai government has freed 178 Myanmar citizens, who were released from the immigration prisons situated in southern part of Thailand.

The runaways after serving their sentences, arrived in Kawthoung Township, Taninthari Region on Sunday evening (Oct 2), according to sources.

A total of 178 workers, including 140 men and 38 women were brought by the rudder boats via Ranong.

Myanmar authorities were present to welcome the freed Myanmar citizens who were replaced and received medical checks.

“Mostly Myanmar returnees were arrested in Thailand due to illegally entering to Thailand.

"The remaining returnees were jailed for various reasons. However, 14 Myanmar citizens out of 178 have been called in to investigate. After carrying out the medical checks, they will be placed in three Quarantine centers,” said one of the officials who welcomed the freed Myanmar citizens.

The authorities said that they (the freed Myanmar citizens] were sent back to their respective homes only after a strict three-day travel restriction and no Covid-19 infection was detected. - Eleven Media Group/ANN