The ancient park earned US$5.36 million in revenue from ticket sales during the January-September period this year, also up 2,012 per cent year-on-year, said the state-owned Angkor Enterprise's statement.

Located in northwest Siem Reap province, the 401-square-km Angkor Archaeological Park, inscribed on the World Heritage List of the United Nations Educational, Scientific and Cultural Organisation (UNESCO) in 1992, is the most popular tourist destination in the South-East Asian country.

"This heritage site is key to attracting tourists, creating jobs and generating incomes for our people in the tourism sector," Cambodian Prime Minister Samdech Techo Hun Sen said on Saturday during a visit to the families, who volunteered to leave their illegal structures in the Angkor park to be relocated to a new place.

In a bid to encourage more foreign visitors to the park, the government announced last month that foreigners who have been living in the kingdom for more than two years could apply for one free admission a year to the Angkor and the Koh Ker Temple.

During the pre-Covid-19 pandemic era, the Angkor received up to 2.2 million international visitors in 2019, generating 99 million dollars in revenue from ticket sales, the Angkor Enterprise said. - Xinhua 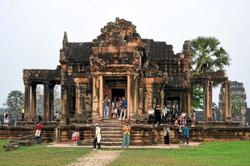