PHNOM PENH (The Phnom Penh Post/Asia News Network): The official minimum wage for workers in textile-related sectors including garment, footwear, and travel goods for 2023 was pegged at US$198, with Prime Minister Hun Sen stepping in to add $2 to the total, making it $200 per month.

The Ministry of Labour and Vocational Training made the announcement on the morning of Sept 21, following a final tripartite vote on four options: $198, $206, $210, and $213.

“The mininum wage has been decided on at $200 for 2023. The meeting voted $198, and Samdech [Hun Sen] added $2, making it $200,” said Pav Sina, president of Collective union of movement of workers (CUMW) who participated in the voting. 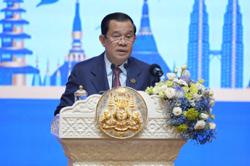