JAKARTA (The Jakarta Post/Asia News Network): As the world grapples with a food insecurity problem induced by rising geopolitical tension and Covid-19, Indonesia, which is expected to take over the Asean leadership next year, is proposing that countries within the grouping set up a kind of region-wide food bank.

Speaking at a public lecture in the Rajaratnam School of International Studies on Monday (Aug 29) evening, Coordinating Economic Minister Airlangga Hartarto said that the regional grouping needs to have a funding mechanism that will allow the shipment of basic food staples like rice from one country to another in the event of a food scarcity problem in some parts of the region.

"How much can each country allocate stock for their Asean partners, for countries like Indonesia, Thailand and Vietnam?

Also we need to set up a funding mechanism to move the stock to countries that need it the most," the senior economic minister told the audience.

Airlangga also said that the same mechanism has been proposed by Indonesia in context with the Group of Twenties (G20).

"We also use this model for the G20 meeting for food security on commodities like wheat. We need to have a multinational financing and funding that is available to source the food," Airlangga said.

In July, during a meeting of finance ministers and central bank leaders, countries in the G20 failed to reach a consensus on the global food crisis exacerbated by Russia's invasion of Ukraine, which is threatening to leave millions at risk of hunger.

"The majority of members agreed that there is an alarming increase of food and energy insecurity," Indonesia said in a statement.

Data from the World Food Programme indicates that 323 million people around the world face severe food insecurity this year, twice the number before Covid-19 and the war in Ukraine.

Following the food price crisis in 2008, Asean has stepped up to cooperate among member states to ensure long-term food security in the region. With rice being the main staple food in agricultural production, Asean came up with the so-called integrated food security framework and strategic plan of action on food security with the key objective of establishing an emergency rice reserve.

During his lecture Airlangga also emphasised that the geopolitical tension in the Asia-Pacific region gave fresh relevance for the principle of Asean neutrality.

"The tension in the East China Sea makes it more relevant for Indonesia and Asean to keep this free and active policy," Airlangga said.

Indonesia is expected to take over the Asean leadership from Cambodia next year, with the Myanmar crisis and the geopolitical tension in the region continuing to loom large.

Indonesia is expected to push for more structural changes to Asean, including the reexamination of fundamental Asean processes like the decision-making process by the consensus and changing it to a voting mechanism.

Singaporean diplomat Ong Keng Yong, who is a former secretary general of Asean, expects that Indonesian leadership of Asean next year will be a force of good in the region.

"This is a special moment for Indonesia as its chairmanship of G20 coincides with Asean’s renewed vigor, which will be a positive factor for regional development, lasting peace and continued prosperity," Ong said in a discussion following the public lecture.

Ong also said that he expected Indonesia to come up with new initiatives to address some of the outstanding problems plaguing Asean.

"Indonesia is expected to come up with new initiatives to address many outstanding issues affecting our region as well as a wider scope beyond South-East Asia, from the contestation of the world’s No. 1 and No. 2 to the current crisis in Myanmar as well as Covid-19," he said referring to the geopolitical contestation between China and the United States. 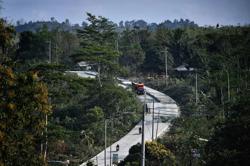