Chinese and Russian leaders Xi Jinping and Vladimir Putin will attend the G20 summit on the resort island of Bali this November, a longtime adviser to the Indonesian president said.

“Jokowi told me that Xi and Putin are both planning to attend in Bali,” Andi, who heads the National Resilience Institute, said.

On Thursday, Jokowi told Bloomberg News that both leaders had given him their assurances.

Indonesian presidential officials did not respond to requests for confirmation of the report.

The Chinese foreign ministry did not immediately respond to a Reuters request for comment.

A Kremlin spokesperson declined to comment to Bloomberg, but another official familiar with the situation told the news agency Putin plans to attend the meeting in person.

The trip would be significant given it would be Xi’s first time outside China since January 2020, when he visited Myanmar.

China maintains a zero-Covid policy that has all but shut its borders to international travel.

Since then, Xi made his only trip outside of mainland China on June 30, visiting Hong Kong to mark the 25th anniversary of the handover of the territory from British control.

Xi is widely expected to secure a precedent-breaking third leadership term during a once-in-five-years congress of the ruling Communist Party scheduled for this autumn, most likely before he would head to Bali for the mid-November G20 gathering.

No dates have been announced for the party congress, but the last two took place in late October and early November.

Chinese officials are also reportedly making plans for a November meeting in South-East Asia between Xi and US President Joe Biden, who is expected to attend the G20 summit in Bali, according to a report in the Wall Street Journal.

As head of the G20 this year, Indonesia has faced pressure from Western countries to withdraw its invitation to Putin over his country’s invasion on Ukraine, which his government calls a “special military operation”.

Indonesia has also invited Ukrainian President Volodymyr Zelenskyy to the summit, in a bid to foster compromise between the two countries.

The Ukrainian leader, whose country is not a G20 member, said he would attend at least virtually.

Jokowi has sought to position himself as mediator between the warring countries, and has in recent months travelled to meet both the Ukrainian and Russian presidents to call for an end to the war, and seek ways to ease the global food crisis.

This week, Jokowi said both countries have accepted Indonesia as a “bridge of peace”.

Meanwhile, Rishi Sunak, one of the two candidates vying to replace Boris Johnson as British prime minister, has called on the G20 to bar Putin from its meetings until Moscow halts the war in Ukraine, his spokesman said yesterday.

“Our G20 partners and allies have a collective responsibility to call Putin’s abhorrent behaviour out. Sitting round a table with him isn’t good enough when he is responsible for children being killed in their beds as they sleep,” a spokesman for former finance minister Sunak said.

“We need to send a strong message to Putin that he doesn’t have a seat at the table unless and until he stops his illegal war in Ukraine.” — Agencies 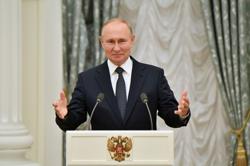