Some 81 per cent of the electricity consumed in Laos is generated by hydropower projects. – EDL-GEN

The move is part of the government’s efforts to ensure energy security, addressing the electricity shortage in the dry season and minimising imports.

At present, 81 per cent of the electricity consumed in Laos is generated by hydropower, followed by coal-fired power plants with 17 per cent.

Meanwhile, renewable energy sources such as solar power and biomass represent only 2 per cent of the power used in Laos, according to a recent report from the Ministry of Energy and Mines.

The government plans to increase the proportion of renewable energy to 11 per cent, as endorsed in its five-year plan for 2021-2025.

Conversely, the proportion of electricity used from hydropower and coal-fired power plants will account for 75 per cent and 14 per cent respectively by 2025.

There are currently 90 energy-generating plants across the country, with a combined installed capacity of nearly 11,000MW. These include 77 hydropower plants, 8 solar power plants, 4 biomass schemes, and 1 coal-fired power plant.

Although no new power plants have become operational in the first six months of this year, the government is pushing for progress in the construction of large-scale energy projects as stipulated in its five-year plan.

Among them are the Nam Ngum 3 hydropower plant, coal-fired power plants in Lamam and Kaleum districts of Xekong province and Bualapha district in Khammuan province, and dams on the Mekong in Luang Prabang and Vientiane provinces.

The main challenge is that about 1,500MW of potential electricity generation is wasted by hydropower stations during the high-flow wet season, while Laos has to import electricity from Thailand in the dry season. The price that EDL pays for this imported power makes it almost twice as expensive as imported electricity sourced from EGAT.

Laos has the capacity to produce 10,000-15,000MW of solar power and about 100,000MW of wind power, according to Deputy Minister of Energy and Mines Dr Sinava Souphanouvong.

Wind farms generating 1.6 gigawatts are now planned, including the 600-megawatt (MW) Monsoon Wind project in Xekong and Attapeu provinces which will sell electricity to Vietnam, according to the Asian Development Bank’s Asian Development Outlook 2022.

In July last year, the government and shareholders in the Nam Theun 2 hydropower plant signed a Project Development Agreement to develop Nam Theun 2-Solar, with an installed capacity of 240MWp. The solar project will be built on the Nam Theun 2 reservoir in Khammuan province.

The government has pledged to tap the potential of the energy sector, particularly the development of hydropower, solar and wind power, so that more electricity can be sold to neighbouring countries. 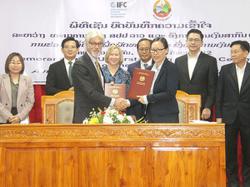