Airport shuttles are seen on Dec 3, 2021 at Kualanamu International Airport in Deli Serdang, on the outskirts of Medan, the provincial capital of North Sumatra. - Antara

MEDAN (The Jakarta Post/Asia News Network): The North Sumatra Police have sent a team of investigators to Jakarta to track down a recruitment company involved in the alleged trafficking of 212 Indonesian workers to Cambodia

The company’s name has been withheld, as the investigation is ongoing.

The regional police’s preliminary investigation found that the company used its website to recruit potential migrant workers from Aceh, East Java, Jambi, Jakarta, North Sumatra and West Kalimantan. It had then transported them to Medan and arranged their flights to Sihanoukville, Cambodia.

The police are still investigating why the recruitment company decided on the North Sumatra capita as a transit point, as well as how it had organised the workers’ departure by chartered plane from Kualanamu International Airport in Deli Serdang, on the city’s outskirts.

"We already knew the identity of the company and our team is in Jakarta for the investigation, with the assistance from the Jakarta Police," North Sumatra Police spokesperson Sr Comr Hadi Wahyudi told The Jakarta Post on Monday.

"We are also investigating the relationship between the company and online gambling rings in Cambodia.”

The police suspected that the workers would be employed by an illegal online gambling ring in Cambodia.

Last week’s joint operation to prevent the departure of the chartered plan was prompted by a tip from the Foreign Ministry, BP2MI North Sumatra head Siti Rolijah said at the time.

The 212 workers, which included 20 women, were taken to the North Sumatra Police headquarters for questioning, and then moved to a haj dormitory in Medan on Saturday afterwards.

“They will be sent home later,” said Hadi.

Three other workers had escaped the raid, according to North Sumatra Manpower Agency head Baharuddin Siagian.

Hundreds of Indonesians have fallen victim to an increasingly rampant human trafficking scheme in Cambodia, most allegedly funded by organisations based in China.

According to data from the Indonesian Embassy in Phnom Penh, at least 417 migrant workers have been duped into human trafficking schemes since the trend started in 2021.

However, accounts from multiple victims suggest the number could be in the thousands, with some testimonies revealing that female victims were vulnerable to other forms of abuse.

Foreign Minister Retno L.P. Marsudi recently spoke with Cambodia’s interior ministry and police chief to discuss the details of a forthcoming memorandum of understanding (MoU), which would serve as a guideline to prevent and resolve future trafficking cases between the two countries.

She expected the MoU would be finalised “as soon as possible” and could help rescue and rehabilitate victims, as well as to prevent future cases while strengthening sanctions against human traffickers. 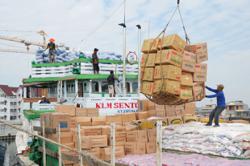