YANGON (Xinhua): Myanmar's agricultural export earnings decreased 1.25 per cent to about US$1.27 billion year on year in the first four months of the present fiscal year (FY) 2022-2023, according to the Ministry of Commerce.

The South-East Asian country changed its fiscal year from the original October-September to April-March beginning this year.

Despite the slight decline in agricultural export earnings, the country's total export value grew 26.71 per cent to over $5.49 billion year on year between April 1 and July 29 this year, official data showed.

All the agricultural export during the period was done by the private sector alone, the commerce ministry's figures showed.

According to the Myanmar Rice Federation, the country exported over 733,096 tonnes of rice and broken rice between April and July this year.

Kyaw San Oo, a rice exporter from Mandalay, told Xinhua that the export of agricultural products including rice and broken rice this year declined because of many factors including changing financial rules and low rice yield.

"This year's rice market is not as good as last year's because rice prices are rising in domestic market and the costs of exporting rice to other countries are high," he said.

The Central Bank of Myanmar (CBM) in April ordered anyone in the country to compulsorily convert foreign currencies into kyats, but then gradually relaxed the conversion order.

The latest relaxation of the conversion order was made on Aug. 5, allowing exporters to compulsorily convert only 65 percent of their export earnings into kyats, and the CBM also changed the reference exchange rate from 1,850 kyats to 2,100 kyats per US dollar.

Aung Kyaw Oo, a rice exporter from Yangon, told Xinhua that the latest moves of the central bank are better for the export market which was sluggish in recent months.

"Currently, even the demand for rice is high in the market," he said, adding that the latest easing of currency conversion orders would help both exporters and importers smoothen their business activities.

Low yield was one of the major factors that decreased Myanmar's agricultural export earnings during the period, and the country's authorities are working on producing high yields of crops.

"The priority must be given to paddy cultivation so as to increase per-acre yield. It is necessary to encourage the manufacturing of products based on agriculture and livestock farms," Senior General Min Aung Hlaing, chairman of Myanmar's State Administration Council (SAC), said Tuesday.

From April 1 to July 29 this year, Myanmar's total foreign trade was valued at over $11.02 billion including the import value of over $5.52 billion.

Myanmar mainly exports agricultural, animal and marine products, minerals, forest products, manufacturing goods and others to its foreign trade partners including China, Thailand, Bangladesh and India, according to the commerce ministry. 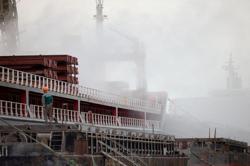