TAIPEI (Bloomberg): From the South China Sea to the Himalayas, Beijing has shown a willingness to seize on perceived missteps by its rivals to tighten its grip over disputed territory. That’s now playing out around Taiwan.

In recent days, the People’s Liberation Army has sought to establish a new status quo on Taiwan with a series of exercises in the wake of US House Speaker Nancy Pelosi’s visit. The moves, including frequent trips across the US-defined median line in the Taiwan Strait and likely firing missiles over Taipei, have shrunk a vaguely defined buffer zone that has kept the peace for decades.

While the most provocative exercise areas closest to Taiwan had expired by Monday, Chinese President Xi Jinping has laid out a template for operating ever closer to the democratically governed island. The Taiwanese Defense Ministry again reported spotting Chinese warships and warplanes nearby Monday (Aug 8), after more than 120 aircraft crossed the median line from Wednesday to Sunday.

"We will probably see different elements of what China has been doing this week become a much more regular occurrence,” said M. Taylor Fravel, professor and director of the Massachusetts Institute of Technology’s Security Studies Programme.

"There is a new normal, or a new status quo, in terms of kind of the military presence that China will have around Taiwan.”

The strategy places greater pressure on the US to craft a response that encourages China to pull back without escalating tensions further, like when then-President Bill Clinton sent two aircraft carrier groups into the area during the last Taiwan Strait crisis.

These days, President Joe Biden faces a China that commands the world’s largest navy and a vast arsenal of anti-ship missiles, increasing the risk to American vessels operating close to its coasts.

Beijing’s message is that Washington needs to stop boosting ties with Taiwan, and restore the diplomatic understanding that discouraged any House speaker from visiting for the past 25 years. If not, China could start to restrict Taiwan’s freedom to operate off its shores in the same way that it has restricted the island’s ability to participate in global organisations since Taiwanese President Tsai Ing-wen’s election in 2016.

"The Chinese are certainly ratcheting up their response and subsequent crises will take this as a new baseline,” said Christopher Twomey, an associate professor at the Naval Postgraduate School.

"Their next signal to a perceived or real provocation will have to be more intense.”

In recent years, China has repeatedly exploited its rivals’ reluctance to risk open war to assert clearer control over contested territory. In 2012, after Washington declined to intervene when it effectively occupied the Scarborough Shoal, China remained on the reef and began to construct a vast network of military facilities on reclaimed land in the South China Sea.

China’s drills last week were larger and closer to Taiwan than a similar show of force in the mid-1990s.

Prior to Pelosi’s arrival, the PLA conducted operations that suggested its planes were ready to "escort” her flight, if it had taken the typical route into Taipei, Bonny Lin and other analysts with the Washington-based Center for Strategic and International Studies said in a report updated Monday.

The six exclusion zones appeared carefully chosen by China to test out its operations during a blockade or invasion scenario, the report said.

For the area farthest east from the mainland, the PLA could "launch attacks on Taiwan’s eastern shores and bases and help deny the United States and other countries from flowing forces into Taiwan from the east,” it added. Zones in the north and southwest could be launching points for future blockades of key ports, the analysts noted.

"China’s attempt to deny the strait as an international waterway by sending warships into the area and crossing the median line represents another attempt to change the status quo,” said Kuo Yu-jen, director of Taiwan’s Institute for National Policy Research. "It will have a grave impact that the international community will find hard to tolerate.”

Official Chinese statements on the drills illustrate Beijing’s desire to portray them as a strategic victory by demonstrating its ability to curb the movement of its rivals. The missile tests confirmed the PLA’s "precision strike and area-denial capabilities,” Eastern Theater Command spokesman Senior Colonel Shi Yi said in a statement, echoing language used by the US and its allies to describe China’s strategy to deny an adversary’s freedom of movement in contested regions.

"The drills created conditions for realizing national reunification at an earlier date.”

Taiwan’s Defense Ministry said the drills had given the military the chance to do "practical training against combat scenes.” It added that no Chinese warships or military planes entered Taiwan’s air space or territorial sea since Pelosi’s visit, even though China’s exclusion zones partly crossed into those areas.

How the Biden administration will respond remains unclear. John Kirby, spokesman for the US National Security Council, said last week that the US would keep the aircraft carrier USS Ronald Reagan and its strike group "on station in the general area to monitor the situation,” and "we will also undertake standard air and maritime transits through the Taiwan Strait in the next few weeks.”

On Monday, Biden expressed confidence China would not escalate tensions further with Taiwan after a confidence series of military exercises that shook the region.

"I’m not worried, but I’m concerned that they’re moving as much as they are,” he said.

"But I don’t think they’re going to do anything more.”

China’s exercises also demonstrated the risk that any conflict over Taiwan could quickly escalate and shake global supply chains. Besides disrupting air traffic and shipping, the drills also covered waters claimed as exclusive economic zones by the Philippines and Japan, with missiles landing in an area claimed by Tokyo.

"If the US doesn’t ‘learn its lesson’ and does more to challenge China’s sovereignty, then I think we’ll see more of these operations,” said Bonnie Glaser, director of the Asia Program at the German Marshall Fund of the United States.

"They may seek to enforce here a new status quo in the Taiwan Strait.” 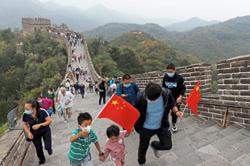