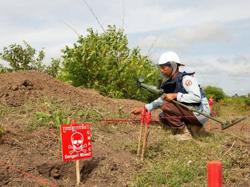 PHNOM PENH, July 19 (Xinhua): Cambodia reported 40 landmine and explosive remnant of war (ERW) casualties in the first half of 2022, up 54 percent compared with 26 over the same period last year, said an official report released on Tuesday.

During the January-June period this year, 10 people were killed, 23 injured, and seven amputated, said the report of the Cambodian Mine Action and Victim Assistance Authorities (CMAA).

The victims included 27 men, one woman and 12 children.

Cambodia is one of the countries worst affected by mines and ERWs. An estimated 4 million to 6 million landmines and other munitions have been left over from three decades of war and internal conflicts that ended in 1998.

However, the Southeast Asian country still needs to clear the remaining 716 square km of land contaminated by mines and ERWs, he added.

Thuch said throughout Cambodia, around 1 million people still live in fear and work in areas contaminated by mines and ERWs and that the kingdom amids to get rid of landmines and ERWs by 2025.

"To achieve this mine-free goal, we need a budget of at least US$90 million," he said at a press conference early this month. - Xinhua