HONG KONG (Bloomberg): Hong Kong suspended flights from three airlines Monday (July 4), bringing its bans this year to 100 as the city continues to impose onerous Covid travel restrictions while the rest of the world beyond China has removed curbs and allows much freer entry.

Emirates Airline, Qatar Airways and Thai Airways International Pcl were the latest to fall foul of rules that punish airlines for carrying passengers infected with Covid. Bans are triggered if either 5% or five or more people on a flight test positive on arrival. Bans and fines are also handed out if passengers have improper paperwork.

The flight suspensions come even as Hong Kong slowly loosens its quarantine rules, which have deterred many people from travelling out of the hub for more than two years.

The city’s new Chief Executive John Lee said in a television interview Sunday that the quarantine policy for international arrivals could be adjusted.

Bloomberg News reported last week that the government is considering cutting the time inbound travellers must stay isolated in hotel rooms to five days, followed by two days at home. The requirement is currently seven days hotel quarantine, down from as long as 21 days earlier in the pandemic.

The flight bans, which last five days, are yet another burden and concern for travellers already tasked with finding hotel rooms for quarantine and lining up Covid tests to get back into the city. If a flight is banned, then carefully crafted hotel bookings fall through.

The situation could worsen as air travel picks up for the summer holidays and more people attempt to enter Hong Kong. Six bans have already been issued in July, the same number as all of June.

Meanwhile, many other places now don’t require incoming travelers to undergo Covid tests or show vaccination documents at all.

Hong Kong International Airport reported 4,749 passenger arrivals and 5,810 departures on Sunday, its busiest day of the pandemic, according to official immigration data. 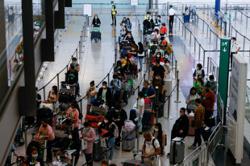