Malaysia, India and Singapore set to provide the major numbers as Thailand expected to see 9.3 million tourists this year 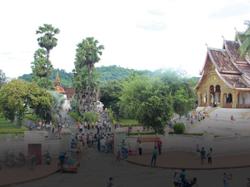 BANGKOK, July 2 (The Nation Thailand/ANN): Over 7 million tourists are expected to enter Thailand in the second half of this year, adding to nearly 2 million in the first half, government spokesman Thanakorn Wangboonkongchana said on Saturday.

Between January 1 and June 28, a total of 1,978,023 foreign visitors entered the Kingdom, generating an estimated 114 billion baht.

The Ministry of Tourism and Sports estimates that another 2.7 million tourists will arrive between July and September, and 4.5 million between October and December, he said.

Arrivals for the whole year are estimated at 9,325,500 with total revenue of about 1.27 trillion baht, he added.

Most arrivals by air this year have been from India, Singapore, Malaysia, Vietnam and the United States while tourists arriving by land have come mainly from Malaysia, Laos, Cambodia, Vietnam and China, Thanakorn said.

Meanwhile, arrivals have surged at southern border checkpoints since the Thailand Pass entry system was scrapped on July 1.

At the Sadao checkpoint in Songkhla province alone, about 5,000 tourists from Malaysia and Singapore crossed into Thailand on July 1.

About 100,000 visitors are expected to enter the country through this checkpoint this month. - The Nation Thailand/ANN