SINGAPORE (The Straits Times/Asia News Network): A study to examine the benefits of a space-based system to allow pilots to talk to air traffic controllers will see Singapore involved in the launch of a communication satellite into space.

It is the first such study of its kind and if successful, will help to shape international aviation laws and make air travel safer, said the four organisations involved.

The Civil Aviation Authority of Singapore (CAAS) and the Economic Development Board's Office for Space Technology and Industry (OSTIn) will work with two firms to launch a purpose-built satellite carrying communications equipment into space next year.

CAAS and OSTIn signed a memorandum of understanding on Tuesday (June 21) with air transport IT firm Sita and satellite platform Startical for the one-year study to improve communications in air traffic control.

In a joint statement, the organisations noted that as current Very High Frequency (VHF) stations are ground-based, there is limited or no VHF voice communications coverage over oceanic, mountainous or remote areas beyond the range of ground-based stations.

Pilots and air traffic controllers communicate via VHF voice communications in instances such as aircraft landing or change in flight paths.

"Space-based VHF voice communications will have more comprehensive coverage, which helps to enhance the safety and efficiency of air traffic management," they added.

The four organisations noted that while technical studies on the concept have been conducted previously, the upcoming trial is the first involving a purpose-built satellite.

The information gleaned will help both organisations in setting standards for space-based VHF voice communications, the joint statement said.

"This proof of concept if successful will be a significant step forward towards global endorsement and adoption."

With air travel expected to growpost-pandemic, more planes will be taking to the skies in the coming years.

ICAO said no fewer than 200,000 flights are expected to take off and land daily worldwide by mid-2030s - almost double the number before Covid-19.

Before the pandemic, Asia-Pacific was the fastest growing region in terms of air traffic.

The International Air Transport Association said air traffic through the region is expected to recover to 2019 levels only by 2025, a year after the rest of the world. 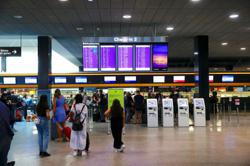