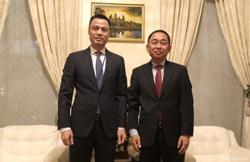 BANGKOK (The Nation/Asia News Network): From next Wednesday (June 1), unvaccinated or partially vaccinated foreign travellers will no longer need to quarantine on arrival in Thailand, Foreign Ministry spokesman Tanee Sangrat said on Thursday.

However, all foreign tourists will still have to register for the Thailand Pass before entry – a requirement that will be lifted for Thai nationals from June 1.

"Fully vaccinated travellers must prepare a vaccination certificate and health insurance coverage worth at least US$10,000," said the spokesman.

"Unvaccinated [or partially vaccinated] travellers must show a negative rapid antigen or RT-PCR test result taken within 72 hours of departure."

He added that all border checkpoints will be opened from June 1 onwards as well.

The TAT reports that arrivals rose to about 20,000 per day from May 1-May 21 after the Test & Go scheme was scrapped.

TAT governor Yuthasak Supasorn expects about 500,000 foreign arrivals per month from now to September, mostly from India, the Middle East and Asean. That number should rise to 1 million per month in the October-December high season when arrivals from the US and Europe surge, he added.

TAT also hopes to see more Chinese tourists visit Thailand by the end of the year.

Yuthasak said Thailand should see 1.5 trillion baht in tourism revenue this year, up 50 per cent on pre-Covid revenue in 2019.

TAT also expects hotel and flight occupancy rates to increase to 50 per cent and 70 per cent, respectively, he added.