DAVOS (The Phnom Penh Post/Asia News Network): Prime Minister Hun Sen has said that Cambodia and other Asean member states will work together to improve Asean-EU relations ahead of the two blocs commemorating their 45th anniversary in Brussels, Belgium, in December.

Hun Sen made the remark on Wednesday (May 25) just before departing Davos, Switzerland, where he had been attending the World Economic Forum.

The premier said the exact programme for the 45th anniversary is still being prepared, but expressed his eagerness to fly to Europe to meet once again with members of the Cambodia diaspora there.

“I will work with other Asean member states to improve Asean-EU relations. When a timeframe for the meeting has been agreed, I will be able to meet those of you who live in Europe again,” he said.

Hun Sen thanked the Cambodians who greeted him in Switzerland, adding that he was proud to see a “big number” of people come to support him and the Cambodian government.

Thong Mengdavid, research fellow at the Mekong Centre for Strategic Studies at the Asian Vision Institute, said that the Asean-Europe partnership is diplomatically important, with a combined population of nearly one billion people, and total GDP of more than $20 trillion.

“Asean and Europe are promoting their cooperation in culture, people-to-people relations, energy, environmental protection, the digital sector and regional security,” he said.

In 2021, the EU agreed to Asean Centrality as a key point in their strategy for Indo-Pacific cooperation.

The strategy demonstrates the EU’s commitment to contribute to the region’s security, stability and prosperity, as well as sustainable development, based on the principle of rule of law and respect of human rights. 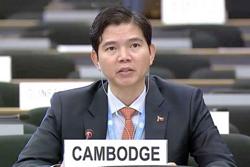