On alert for monkeypox

Keeping a close watch: Singapore’s Ministry of Health has advised travellers to avoid contact with wild animals and consumption of bush meat. — Reuters

WHILE there are no new monkeypox cases in Singapore, the Ministry of Health (MOH) has alerted all medical practitioners here to be vigilant in detecting and reporting cases of the disease.

The ministry said it would continue to monitor the situation closely.

Responding to queries from The Straits Times, the MOH added on Saturday that as at Friday, no monkeypox cases had been detected here, apart from the imported case from Nigeria which was detected here on May 8, 2019.

The virus is endemic in parts of central and west Africa but over recent weeks, cases have been detected in nine European countries, as well as the United States, Canada and Australia.

MOH said monkeypox is a rare disease caused by a virus that is primarily transmitted to humans from animals. Human-to-human transmission, while possible, is limited.

An individual is infectious primarily during the period when they have symptoms, particularly skin rash.

“Transmission typically occurs from close contact with the respiratory tract secretions or skin lesions of an infected person, or objects recently contaminated by an infected person’s fluids or lesions,” the ministry said.

A spokesman for the National Centre for Infectious Diseases said the transmissibility rate will vary according to the outbreak and specific epidemiological settings.

“Generally, sustained human-to-human transmission has been rare thus far. But we will need to study this again for the current outbreak,” added the spokesman.

They may also get a skin rash that usually appears one to five days after the first symptoms, and which may resemble blisters caused by chickenpox.

Individuals will usually recover from their symptoms in two to four weeks.

“The disease is usually self-limiting. However, severe illness and death can occur in some individuals,” the ministry said.

Travellers are advised to take necessary precautions, including maintaining a high standard of personal hygiene, avoiding direct contact with skin lesions of infected living or dead persons or animals.

The ministry added that travellers should also avoid contact with wild animals and consumption of bush meat.

“Returning travellers, especially from areas affected by monkeypox, should seek immediate medical attention if they develop any disease symptoms within three weeks of their return.

“They should also inform their doctor of their recent travel history,” said the ministry.

Infectious diseases experts said that while it will not be surprising for cases to appear in Singapore, that should not be a cause for concern as contact tracing, isolating the infected case and quarantine of contacts are likely to control the spread here, should there be any.

Dr Leong Hoe Nam, an infectious diseases specialist at the Rophi Clinic at Mount Elizabeth Novena Hospital, said: “It is a matter of time (before there are cases here).

“Singapore is a well-connected country. Many foreigners come in and out. A porous country like Singapore must expect cases like this.”

When asked if it could become the next pandemic, Associate Professor Alex Cook, vice-dean of research at National University of Singapore’s Saw Swee Hock School of Public Health, said: “At the early stage of any outbreak, there is uncertainty on the nature of the epidemic but so far, there is no cause for alarm.” — The Straits Times/ANN 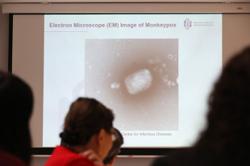