BANDAR SRI BEGAWAN, May 19 (Borneo Bulletin/ANN): No cases of the new Omicron sub-variants BA.4 and BA.5 have been detected in Brunei, said Minister of Health Dato Seri Setia Dr Mohd Isham Jaafar at the daily press conference in the capital.

Neighbouring countries have recently detected the new Omicron sub-variants, which have also gone widespread in the West, showing a slightly faster rate in spreading compared to the previous sub-variants.

The minister said the government is monitoring the situation through genomic sequencing, adding that although reverse transcription-polymerase chain reaction (RT-PCR) swab testings have decreased, it is still being carried out.

“If there are any positive cases found with the right amount of CT-Value, then the genomic sequencing can be carried out. On average, since the beginning of the year, we have sequenced 800 to 1,000 cases from RT-PCR tests,” said the minister.

Among the new cases, 298 were results from Antigen Rapid Test (ART) tests uploaded to the government and two were from 343 Polymerase Chain Reaction (PCR) laboratory tests performed in the past 24 hours.

As of May 17, 68.8 per cent of Brunei's population have received three doses of Covid-19 vaccines from Pfizer, BioNTech, Moderna, AstraZeneca, and China's Sinopharm.

Currently, 1,823 active cases are being treated and monitored in Brunei, where 143,477 recoveries from COVID-19 have been reported. - Xinhua 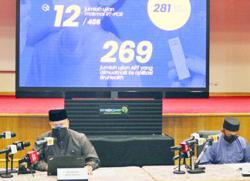