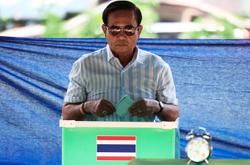 Tourists visit Maya bay after Thailand reopened its world-famous beach after closing it for more than three years to allow its ecosystem to recover from the impact of overtourism, at Krabi province, Thailand, January 3, 2022. - Reuters

BANGKOK, May 13 (The Nation Thailand/ANN): Prime Minister Prayut Chan-O-Cha has said that he would emphasise Thailand’s full reopening when he meets with leaders of other countries during the 2nd Asean-US Special Summit in Washington on Friday.

Prayut, accompanied by Foreign Minister Don Pramudwinai and Energy Minister Supattanapong Punmeechaow, flew to Washington on Wednesday morning for the summit, which will mark the 45th anniversary of Asean-US relations.

In a Facebook post, Prayut said the summit is an opportunity to meet with the US president and high-ranking representatives to promote cooperation on recovery and sustainable growth in South-East Asia, as well as push for Asia-Pacific Economic Cooperation summits.

He said the summit is also an opportunity to gain confidence among the US private sector in Thailand’s readiness to transition toward an economic recovery, which includes ushering in a digital economy, sustainable development, clean energy and electric vehicles.

Expanding trade and investment in industries of the future is in line with the country’s strategic plan, Prayut said.

“Most importantly, I will get an opportunity to emphasise to country leaders that Thailand has fully reopened for tourism, business, conferences, medical services, and so on,” he said.

“After we scrapped the Test & Go scheme on May 1, more than 300,000 tourists entered the country within a week and this is expected to rise between May and September.”

The number of foreign tourists visiting Thailand during the high season between October and December is expected to increase to least 1 million per month, the PM said.

Prayut also said the summit would enable Thailand to boost its economy along with those of Asean and the world community, adding that it is an important step [for Thailand] to become one of the leading countries in the post-Covid era.

On Tuesday, the Cabinet approved a draft statement which focuses on strengthening relations and promoting economic cooperation between Asean and the US.

The Cabinet also approved a draft appendix under which the Thai and US defence departments would exchange information on remote sensing. - The Nation/ANN