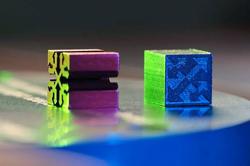 The Cube of Interaction (left) and the Structure & Reflectance cube will be part of the exhibit. - ST

SINGAPORE (The Straits Times/Asia News Network): An intricately designed 3D-printed cube, which represents the melding together of art and science, is one of the Republic's contributions to an exhibit that mankind will be sending to the moon.

The cube, named Structure & Reflectance, is smaller than a standard dice - measuring 0.98 cm on each side - with four of its faces each depicting a unique series of patterns.

The art piece is among a hundred artworks selected by the Moon Gallery Foundation, based in The Netherlands, as the first permanent extraterrestrial art gallery, which is set to land on the moon by 2025.

The art gallery, which comes in the form of a 10cm-by-10cm tray that is 1cm deep, will be on board a test flight to the International Space Station - the final frontier of the human habitat in space - via the NG-17 rocket as part of a Northrop Grumman Cygnus resupply mission in February 2022.

On its return flight, the Moon Gallery will become a part of the NanoLab technical payload, a module for space research experiments.

The 3D-printed cube was a collaboration between local artist and designer Lakshmi Mohanbabu and Assistant Professor Matteo Seita from the Nanyang Technological University’s School of Mechanical and Aerospace Engineering.

Lakshmi also submitted another cube in metallic orange, known as the Cube of Interaction, to the moon gallery.

This project was supported by the National Additive Manufacturing Innovation Cluster (Namic), which linked up Lakshmi with various scientists from different organisations to help her fabricate her designs.

Dr Ho Chaw Sing, co-founder and managing director of Namic, said: “Space is humanity’s next frontier. Being the only Singaporean – among a selected few from the global community – Lakshmi’s 3D-printed cube presents a unique perspective through the fusion of art and technology. We are proud to have played a small role supporting her in this ‘moon-shot’ initiative.”

The patterns seen on each face of both cubes were recreated from Lakshmi's paintings, which revolve around the concepts of unity, diversity and complexity in humankind, she told The Straits Times in an exclusive interview.

"Part of the complexity lies in the duality of people - there's the external facade which we perceive about each other, but there are parts of ourselves that we don't reveal," she said.

"In a way, the moon has the same quality - there's the far side of the moon that always faces away from Earth that we've never got to see, until space travel made it possible."

To create the 3D-printed cube, figuring out a way to convey these ideas using materials was the key challenge, said Dr Seita, who is also a faculty member of NTU's School of Materials Science and Engineering.

"However, we soon realised that there is a clear parallel between materials and people, in that they are both made of very complex - and mostly hidden structures," he noted.

For instance, metals are made of small crystallites of different atomic lattice orientation, which we can only see by the naked eye when we treat the metal with chemicals.

These crystallites may assume different shapes, sizes and orientation in different metal objects, depending on the processes employed to make them, noted Dr Seita.

"Using additive manufacturing (also known as 3D printing), we're able to control those features - and thus the structure of metals - at an incredible level of detail," he added.

Each patterned face of the cube, which is made of stainless steel, consists of two distinct crystals with different orientations, and a shape that mimics Lakshmi's artwork.

The patterns only appear after the metal cube was placed in acid. During this treatment either crystal corrodes differently, creating a visual contrast on the cube face surface, said Dr Seita.

When viewed from certain angles in coloured light, these patterns come to life.

"It's the idea of perspective, the cube is able to take on the different colours shown on it - much like how people see things with different coloured lenses," said Lakshmi.

The creation of the cube is also an ode to the advancements in space travel - building on the idea that previous unseen parts of the moon are now illuminated to mankind, said Dr Seita.

"We're now able to create objects with both complex geometry and complex structure, which would be impossible to make with any other manufacturing process," said Dr Seita.

These capabilities could be used to produce parts using much less material - such that they are more lightweight, with improved durability and strength compared to when manufactured conventionally.

This cutting-edge technology creates more opportunities for 3D printing in aerospace and aircraft manufacturing in future, he added. 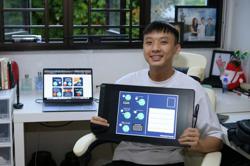