“We are now able to sequence the Covid-19 genes locally. If there is Omicron in the midst, we will inform the public,” the minister said, adding that to date, all cases have been of the Delta variant.

He also said, “In the past week, quite a number of countries have detected Omicron in patients. But based on the findings of these countries, with South Africa being the first to detect it, the symptoms that have shown up are mild.

"The same goes for European countries, where there is no significant impact on the healthcare system.”

The minister noted that the new variant has been detected in over 30 countries, thus, to control the spread, vaccination and adherence to standard operating procedures are the best defences against the virus.

“The Omicron development is still at its early stage,” Dr Mohammad Isham said, “there is no need to shut down everything.”

The minister added that the World Health Organisation (WHO) is currently studying the effect of Omicron on the population and it may take a few weeks to obtain a better picture of the situation.

Meanwhile, on booster shot uptake among the elderly, the minister said some 2,355 have taken the jab, which he believed to be important “not only against Omicron but for all variants of Covid-19 as vaccine immunity wanes after six months”.

The booster programme is currently being rolled out in phases, with priority on frontliners, followed by those aged 50 and above.

Dr Mohd Isham said, “There is one additional case to an existing cluster while three new cases are being investigated to determine the source of infection.

"Two new clusters were detected including TM Majeed Cluster which is a housing cluster for the company’s employee accommodation.”

In the past 24 hours, 3,627 samples were tested for the SARS-CoV-2 virus bringing the total number of laboratory tests conducted since January 2020 to 631,475 tests.

Dr Mohd Isham said, “On December 2, 1,002 individuals received the Covid-19 vaccine, which means that under the National Covid-19 Vaccination Programme, 404,070 individuals have received the first dose of the vaccine, or 94 per cent of the total population.

“Meanwhile, 350,223 individuals have completed the vaccination schedule, bringing the rate of fully-vaccinated to 81.4 per cent.” - Xinhua 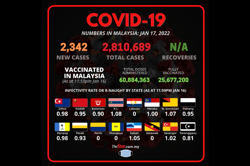