BANDAR SERI BEGAWAN (Borneo Bulletin/Asia News Network): Over 75 per cent of households in Brunei have Internet subscription, proving that the nation’s digitalisation efforts are showing progress, especially since the onset of the Covid-19 outbreak.

The Sultanate through the Ministry of Transport and Infocommunications (MTIC) has targetted to achieve 75 per cent of households Internet subscription by 2025 under its Strategic Plan.

As of September 2021, almost 80,000 fixed broadband subscribers were recorded, equivalent to 75.2 per cent of the nation’s households. This is further complemented by 135.7 per cent of mobile broadband penetration among the population.

The meeting was hosted by the Ministry of Science and ICT of Korea with the theme ‘A New Normal, Rebuilding an Inclusive Society Through Digital: Promoting Broadband Connectivity and Digital Inclusion’.

During the meeting, the minister participated as a panellist in Session 1: Broadband Connectivity where he shared on the Sultanate’s experience in navigating through the Covid-19 pandemic.

He shared that Brunei is embracing technologies in its national agenda towards digital transformation by embarking on key technologies such as 5G, Artificial Intelligence (AI) and Internet of Things (IoT).

Brunei is also looking towards enhancing broadband connectivity, among others, through 5G pilot projects and 5G talent development.

Dato Seri Setia Awang Abdul Mutalib also touched on the need for a safe and secure environment highlighting the need to increase efforts against cybersecurity threats, with the newly formed agency Cyber Security Brunei (CSB). This includes having a key legislation on cybersecurity, which is now in its final stage towards enactment.

The region’s ministers and heads of delegation also exchanged information on building a digitally inclusive society in the region. 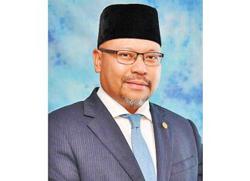