"I want to bring what I have learned in China about railways back to serve Thailand," said Kantithat Danaut, expecting the construction of the China-Thailand railway to pick up speed.

The Nakhon Ratchasima province in northeastern Thailand, where the 23-year-old boy was born, is expected to be linked with the capital Bangkok by the China-Thailand railway that has started construction in 2017.

Under the joint training programe for high-speed railway talent development between China and Thailand, Kantithat and 39 other Thai students first received one-month language training at the Confucius Institute at Khon Kaen University, and then went to the Wuhan Railway Vocational College of Technology (WRC) in central China's Hubei Province for an eight-month training to learn to be a high-speed railway technician.

Recalling his stay in Wuhan, Kantithat said it is the help of his teachers and senior schoolmates that made him be able to improve his Chinese and learn about high-speed trains.

So excited when first taking China's high-speed railway train, Kantithat said it was comfortable, safe and fast, "you can feel how fast it is when there is the other high-speed train running from the opposite direction."

Back to Thailand from China, Kantithat then went to Japan as a technician intern, while he wanted to go to China to continue learning about high-speed railway next year.

As the bilateral railway talent development cooperation continued apace, more vocational institutions in Thailand have joined the training program, importing technologies and curriculum development schemes from China, to help Thailand foster railway talents, and bringing Thai youths like Kantithat closer to their dream of a railway driver or technician.

Sitting at the controls of a state-of-the-art simulator, Preeyaporn Kaenavong and her classmates were trying to accelerate a train out of a station.

The "virtual train" gathers pace as they guard against unknown hazards ahead -- from adverse weather conditions to dangers such as obstacles on the track.

Preeyaporn and her classmates are operating a train driver simulator, the centerpiece of the Lu Ban High-Speed Railway Institute, which was established in Banphai Industrial and Community Education College in Thailand's northeastern province of Khon Kaen, in a collaborative effort with the WRC in China.

The simulation driving training base was a gift from WRC's partner Zhengzhou J&T Hi-Tech Co., a company headquartered in central China's Henan Province.

"I want to go to China to continue my study and board a high-speed train to experience the speed," said Preeyaporn.

Junyar Pabu, former head and now adviser of the Banphai Industrial and Community Education College, said in recent years, Thailand's Ministry of Education has been enhancing cooperation with its Chinese counterpart and encouraging closer cooperation between Thai and Chinese vocational colleges to cultivate railway talents. "This is how the Lu Ban High-Speed Railway Institute was established."

Besides the WRC, the Banphai college is also cooperating with China's vocational colleges in southwestern provinces of Guizhou and Yunnan as well as Chongqing Municipality, Junyar said.

"The China-Thailand railway talent development cooperation fully demonstrates that the Belt and Road Initiative has promoted the common development and prosperity along the routes," Junyar said.

Both Thailand and China will benefit from the China-Thailand railway, he said, hoping the construction work can accelerate.

"I'm waiting for the China-Thailand railway, hoping it can be completed as soon as possible so that I can contribute to its development," Kantithat said. 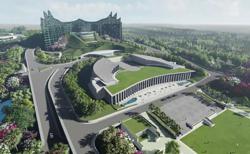