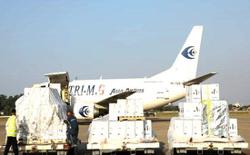 Thongloun, who is the Party Secretary General, highlighted the importance of strengthening solidarity among people of different ethnicities and promoting a spirit of patriotism in order to maintain peace and security and protect the lawful interests of all Lao people.

The President called for members of the Committee of the Lao Front for National Development at all levels to empathise with the aspirations of the multi-ethnic Lao people and to be aware of the actual circumstances in different localities, saying this would reinforce unity and create a strong momentum for the country’s development.

The Lao Revolutionary Party at all times considers the maintenance of social harmony as a priority and seeks to mobilise all resources in the cause of national defence and development.

The President acknowledged the accomplishments and contributions of the Lao Front to national development over the past 46 years.

However, members of the Lao Front at all levels need to do more to educate and inspire people of all ethnicities to love the people’s democratic regime and to take part in patriotic movements for development, he said.

The Lao Front was established on August 13, 1950, when it was known as the Lao Freedom Front, later becoming the Lao Patriotic Front.

Today called the Lao Front for National Development, the organisation is the face of national unity, socio-political relations, and voluntary unity.

It was formed to represent the political, socio-political and personal wishes of all Lao people, regardless of ethnicity, religion, gender or age.

As Laos deals with the challenges posed by the Covid-19 pandemic, the Lao Front has been urged to help citizens understand the Party’s policies and state laws, as well as play a role in poverty reduction.

The Committee of the Lao Front has been advised to encourage people of all ethnic groups to boost productivity so that more goods are available for market sale and people can earn more money to ease their poverty.

The President also said it is essential for the Lao Front to make it easier for people of Lao descent living overseas to return home and participate in national development.

The 11th Party Congress elected a new executive committee of the Lao Front for National Development, with Dr Sinlavong Khoutphaythoune being elected as the Front’s new president.

The President instructed the new executive committee to strengthen solidarity, not only within Laos but also with other countries. - Vientiane Times/ANN

Death of twin boys: Cops bring father to canal where bodies were found
China unveils new guidelines to promote implementation of RCEP
Thai navy sets up emergency centre to tackle Rayong oil spill
Brunei and India continue to strengthen ties
Wetlands around Tonle Sap shores in Siem Reap restored
US donates another 1,698,000 doses of vaccine to Laos
China hopes to advance ties with UK with 'Ice-breaking spirit'
Jail, caning for Singapore dance instructor who molested two boys in their primary schools
Brunei cop charged over investment scam
Singapore shoppers have to pay 5 to 10 cents for each disposable bag at supermarkets from 2023