THE direct role of the nation’s government in civilian-targeting in its bloody campaign against drugs has escalated since 2020 and the bloodshed shows no signs of subsiding, according to a US data analysis group.

“The Philippine state has taken an increasingly large role in targeting civilians itself, no longer trying to create distance by ‘outsourcing’ the majority of violence to vigilantes,” said the report by the Armed Conflict Location and Event Data Project (Acled), a US-registered nonprofit organisation that analyses information and data on conflicts and violence worldwide.

“Since 2020, there has been an upward trend in the proportion of state involvement in drug war violence,” Acled said in the report devoted to the ongoing campaign against drugs by Philippine President Rodrigo Duterte.

After studying and analysing data and information from at least 40 sources, it also found that the drug war’s toll on civilians had been underreported.

“Our new data clearly indicates that the government is severely undercounting the drug war’s toll on civilians in the Philippines,” said Dr Roudabesh Kishi, Acled director of research and innovation.

The Acled report found at least 1,100 fatalities in the anti-drug campaign that the government has not counted.

It said analysis of the data showed that the actual civilian death toll in the campaign against drugs was 25% higher than the government’s count “even by a conservative estimate”.

“The government admits that over 6,000 killings have occurred during police operations in association with the drug war.

“These figures exclude ‘vigilante’ killings by non-state actors, however, which played a significant role, especially in the early days of the drug war, in targeting civilians,” Acled said in its report.

“There are clear ties between anti-drug vigilantes and the state. At minimum, such actors are supporters of Duterte and his drug policies, carrying out attacks inspired by Duterte’s rhetoric.

“In other cases, the ties between these agents and the state have been more direct, with perpetrators relying on police to secure the perimeter in the lead-up to attacks,” Acled said.

While the government keeps a death toll, it has done little to hold police officers accountable for killing civilians.

“Many officers have already been absolved of any wrongdoing during internal police investigations,” Acled added.

According to Acled, its data analyses and research reports are among the key documents being examined by the International Criminal Court in the case filed against Philippine officials in connection with alleged unlawful killings during the campaign against drugs. — Philippine Daily Inquirer/ANN 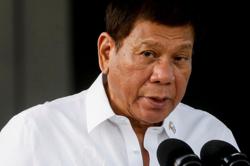