HANOI (Vietnam News/Asia News Network): A total of 4,411 new Covid-19 infections and 54 deaths were recorded in Vietnam on Wednesday (Oct 27).

Among the new cases, seven were imported and the rest were local transmissions. There were 2,052 new infections found in the community.

Vietnam’s total caseload now stands at 900,585, of which 895,793 are the result of the fourth wave of infections that began in late April.

Some 2,718 patients nationwide are in a serious condition, according to the Ministry of Health’s report, with 443 requiring invasive ventilation and 20 on life support (ECMO).

A further 2,024 patients were given the all-clear on Wednesday, taking the total number of recoveries to 812,314.

Around 75.9 million Covid-19 vaccine doses have been administered in Vietnam to date, and 22.2 million people are now fully inoculated. 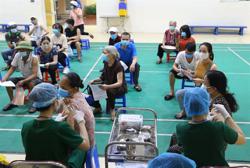