Visitors learn about the future applications of the combination of 5G and blockchain technology at an industrial expo in Hangzhou, Zhejiang province. - China Daily

BEIJING (China Daily/Asia News Network): Xi Jinping, general secretary of the Communist Party of China Central Committee, has highlighted the importance for China to promote the sound development of the digital economy, saying that it is a choice with strategic significance in order to seize the new opportunities from the new round of the scientific and industrial revolution.

In a speech delivered at a group study session of the Political Bureau of the CPC Central Committee on Monday, Xi said that the digital economy has become a key force in restructuring the global economy and transforming the global competitive landscape in recent years. The internet, big data, cloud computing and other technologies are being increasingly integrated into all sectors of economic and social development.

Noting that the digital economy in China has developed rapidly and made remarkable achievements since the 18th National Congress of the CPC in 2012, Xi said that since the Covid-19 pandemic started, the digital economy has played an important role in supporting China's efforts to fight the virus and to resume production and life.

The sound growth of the digital economy will help China advance the fostering of a new development paradigm, promote the building of a modernised economy and build up the nation's new competitive edges in the current era, said Xi, who is also Chinese president and chairman of the Central Military Commission.

He stressed making breakthroughs in core technologies in key fields through self-dependent innovation, urging efforts to make good use of the nation's advantages in terms of the socialist system and a super-sized domestic market.

China must uphold the autonomy of developing the digital economy, he said.

Xi said that the new infrastructure construction must be accelerated to build an information "artery "for economic and social development.

To promote the integrated development of the digital economy and the real economy, Xi called for efforts to digitise the manufacturing, service and agriculture sectors and to transform traditional industries with new internet technologies. Digital technologies should play an enhanced role in promoting economic development, he added.

Xi said that the development of the digital industry in key fields should focus on strategic and cutting-edge areas and serve major technological breakthroughs and major development demands.

According to Xi, an all-around, multitiered and multidimensional supervision system should be set up to regulate the development of the digital economy in order to ensure fair competition.

Practices that undermine public interests and impede fair competition will be corrected, and monopolistic behaviour by internet platform companies and the disorderly expansion of capital will also be prevented, he said.

Xi required efforts to perfect relevant laws and regulations as well as policies and systems in order to further modernise China's system and capacity for digital economy governance. While departments should coordinate with each other to carry out supervision, enterprises responsible for internet platforms should also set up a mechanism for industry self-regulation, he said. 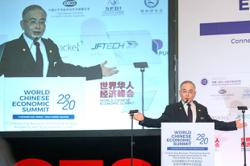