To encourage more residents to lead active lifestyles, greater emphasis will be placed in planning and designing the built environment. - HDB

SINGAPORE (The Straits Times/Asia News Network): Singapore's first and oldest satellite town Queenstown will be carved out as a health district in a pilot programme to support residents to lead healthier and more productive lives.

This will be done through more integrated planning and design of the estate and more community-driven programmes, said National Development Minister Desmond Lee on Wednesday (Oct 20).

The goal is to encourage "purposeful longevity" through opportunities for seniors to engage in paid work, volunteering activities and lifelong learning, said Mr Lee at the HDB Awards ceremony held at HDB Hub.

One of the ways is to develop "affordable and usable technology that helps residents to take care of their health better and to age in place gracefully", he added.

Lee noted there is an increasing need to shift disease management away from acute hospitals to the community.

"This means focusing on preventive and primary care, and take care of people before they fall so sick that they need to go to the hospital, so that healthcare becomes more about enhancing health, rather than just treating sickness," said Lee, adding that the built environment has a key role to play in this.

To improve residents' access to preventive health services, health screenings and talks will be brought closer to residential areas and conducted within the community, he said.

To encourage more residents to lead active lifestyles, greater emphasis will be placed on planning and designing the built environment.

An example is a jogging loop at the carpark rooftop garden at Queen's Arc, a Build-To-Order (BTO) project in Queenstown launched in August.

There are also urban farming spaces, along with a pedestrian mall with wellness-themed amenities and flexible spaces that can be used to hold community programmes.

A wellness trail and heritage walk is also incorporated into the BTO project to make it convenient for residents to exercise.

The BTO project drew significant interest from home seekers, with more than seven applicants vying for each of the 534 four-room units, despite a wait time of more than five years. Prices for a four-room flat starts from $540,000.

Queenstown was picked as the pilot site for the health district as its demographics closely mirror Singapore's projected national demographics by the year 2030.

The mature town, which was developed in the 1950s, currently has one of the oldest populations in Singapore, with almost one out of every four residents aged 65 and above.

It is one of Singapore's most sought-after housing estates, with the third-highest number of million-dollar HDB resale flat transactions after the central area and Bishan.

Existing neighbourhoods within the district will also be enhanced through HDB's neighbourhood renewal programme, such as including resting areas along covered linkways and more fitness stations.

Future housing estates in Ulu Pandan will have a balance of greenery and water bodies to enhance local biodiversity. These will be connected to the Green Corridor and the wider park connector network to encourage more recreational activities, said HDB.

Lee said: "Public housing in Singapore goes far beyond putting roofs over people's heads. It touches almost every aspect of our lives and our society. It enables Singaporeans of different backgrounds to share common experiences and helps us to build a more cohesive society.

"But as much as we have achieved, we must keep pressing on to continually improve our HDB flats and our housing policies in support of the progress of our people and our society, so that Singapore remains strong and united for many generations to come." 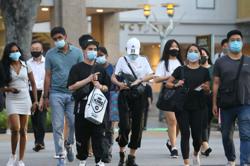