Women receiving the Sinovac coronavirus disease vaccine as the Thai resort island of Phuket rushes to vaccinate its population amid the Covid-19 outbreak. - Reuters

BANGKOK, Oct. 19 (Xinhua): Thailand is speeding up vaccination roll-out as the South-East Asian country plans to reopen for vaccinated visitors from November to revive the pandemic-battered economy.

On Monday, the country administered nearly 1 million doses of Covid-19 vaccines as it prepares to welcome back fully vaccinated international visitors from the beginning of next month, according to the Centre for Covid-19 Situation Administration (CCSA).

As of Monday, Thailand has administered more than 66 million doses of vaccines, with about 37 per cent of its total population having been fully vaccinated, according to the CCSA.

However, the figures of full vaccination coverage are much higher in key tourist destinations, led by Phuket with 76.7 per cent and Bangkok with 69.7 per cent, according to the COVID-19 task force.

Thailand aims to inoculate about 70 per cent of its nearly 70 million population by the end of this year.

The low-risk and quarantine-free list would initially include at least 10 countries and regions, such as Britain, Singapore, Germany, China and the United States, Prayut said during a televised address on Oct. 11.

According to the CCSA, full details of the reopening plan will be available within this week.

Of the new cases, 1,646 were found in Bangkok and its five neighboring provinces, according to the CCSA.

The total number of infections has risen to more than 1.8 million in the country, with fatalities reaching 18,407.

Thailand is beefing up efforts to revive its economy as the tourism sector, the main growth engine that contributed roughly 20 percent of the country's GDP before COVID-19, has been hit hard by the pandemic. - Xinhua 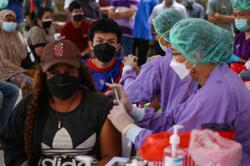