A dried up rice field due to the drought in the Mekong Delta province of Ben Tre. The Delta region faces the risk of water shortages, drought and saline intrusion. - Vietnam News/ANN

HO CHI MINH CITY, Oct 18 (Vietnam News/ANN): The Cuu Long (Mekong Delta) region faces the risk of water shortages, drought and saline intrusion due to low water sources from the upper Mekong River and human exploitation of land and forests in the upstream, experts have warned.

Speaking at a meeting last week, Prof. Dr. Chau Nguyen Xuan Quang, deputy director of the Institute of Environment and Natural Resources under the Vietnam National University in HCM City, said that water levels in rivers had followed a downward trend in recent years.

Higher levels of saline intrusion are expected to occur in the region more frequently, leading to a lack of fresh water.

“The upstream flow towards the Mekong Delta region is decreasing, so saline intrusion will increase,” he said.

Saline intrusion in the region depends on the water source from the upper Mekong River, high tides and many other changes.

Floods in the Mekong Delta were the largest in 2011 and they dropped gradually in the following years with the lowest recorded in 2016, significantly affecting agricultural and aquaculture activities and people’s livelihoods.

“Frequent and intense drought has become worse in the region since 2015,” Quang said.

Experts have pointed out that in addition to the impact caused by the operation of upstream reservoirs, human exploitation of land and forests in the upstream have caused the river to change its flow, causing flood water to flow downstream much later and lower than before.

Prof. Dr. Chau Nguyen Xuan Quang, deputy director of the Institute of Environment and Natural Resources, said: “Floods are decreasing while droughts are increasing, affecting the water resources of the region.

“The consequences are unpredictable. Solutions are needed to deal with abnormal factors from the upstream area.”

Population growth has accelerated urbanisation, while ground subsidence is 2-3cm per year, he noted.

Urbanisation has increased over the past 20 years, contributing to global warming in the region with the temperature increasing by an average of 1.3 to 1.4 degrees Celsius between 1986 and 2014.

Dr. Truong Thanh Canh, lecturer at the University of Natural Sciences in HCM City, said it was important for the Mekong Delta to restore wetlands. “We should choose crops or new production models that need less water to save it.”

He recommended that the region develop a strategic plan that will give priority to more practical solutions instead of trying to change external factors such as those in the upstream area.

Provinces in the region should stay updated on hydro-meteorological forecasts and take proactive measures to prevent droughts and saline intrusion.

“We need a comprehensive solution suitable to the natural, geological and hydrological conditions of our country to save water resources,” he said.

The Mekong Delta is a key economic region covering ​40,000sq-km, and is home to some 18 million people.

Water resources sustain the lives of the people and the ecosystem in the region. Agriculture and aquaculture are key economic sectors in the region, of which water is essential, according to the Institute of Environment and Natural Resources. - Vietnam News/ANN 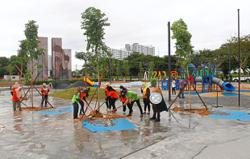 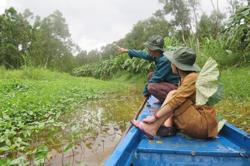