A Komodo dragon is seen in the Komodo National Park, East Nusa Tenggara. Komodo is an endemic animal to Indonesia. - Jakarta Post/ANN

JAKARTA, Oct 3 (Jakarta Post/ANN): The recent move by Switzerland-based organisation the International Union for Conservation (IUCN), to list Komodo dragons, the world’s largest living lizards, as one of the world’s endangered species should be further scrutinized, Indonesian scientists have said.

The IUCN, in the latest edition of the “Red List of Threatened Species” published in early September, moved the Komodo dragons to endangered status, which the organization reserves for species facing threats of extinction in the wild.

The IUCN reasoned that the status change – the first in 25 years since the organization assessed the species was "vulnerable", a notch below its current status, in 1996 – could be attributed to rising sea levels caused by climate change, which was expected to reduce the Komodo dragon’s viable habitat by 30 percent in the next 45 years.

A deterioration in the quality of the dragons’ habitat, including through human encroachment, has also been cited to justify the species’ new status.

Indonesian scientists, however, have a different view, arguing that climate change is not the biggest threat that could nudge the population of the giant lizards closer to extinction and emphasized that human-related activities, such as land clearing and tourism, near the dragons' habitat could be more threatening to the Komodo dragons' population.

Bandung Institute of Technology (ITB) ecologist Aditya Dimas Pramudya argued that while rising sea levels could pose a “substantial threat” to animals with limited habitat zones in small islands, including the Komodo dragons, there were other factors that potentially were more threatening to the dragons' population.

“In my view, the rise in sea levels cannot be categorized as a substantial threat [for Komodo dragons] at the moment, particularly when we compare [such factors] with the threat of a declining population of the Komodo’s prey through illegal hunting,” said Aditya on Sept. 28.

He said a lot of research had been conducted that highlighted the change in the dragon’s general behavior, particularly its declining sensitivity toward the human presence. This, Aditya said, could lead to increasing frequency of conflicts between Komodo dragons and humans in the future.

“In the long run, such conflicts could potentially create lose-lose situations for both [Komodos and humans],” said Aditya.

Indonesian Institute of Sciences (LIPI) researcher Evy Ayu Arida concurred with Aditya in saying that human encroachment into the Komodo dragons’ habitat, particularly in the areas outside of a national park, could be a serious threat to the giant lizard’s population.

“The increase in the human population, with all of their related activities including land clearing for agriculture, and the continued decline in the dragons’ natural prey could be the most serious threat [for Komodo dragons],” said Evy.

The dragon’s population is concentrated on the islands of Komodo and Rinca, which, along with Padar, Nusa Kode and Gili Motong, form the Komodo National Park in East Nusa Tenggara.

The dragons’ populations have also been observed on the western and northern coasts of the nearby island of Flores. The IUCN estimated that the giant lizard’s adult population was about 1,383 and projected that figure to decline by more than 30 percent over 40 years from the 2010 baseline.

University of Indonesia biological conservation professor Jatna Supriatna also said that the increase in human activities, particularly driven by tourism, around the giant lizard’s habitat was potentially a more imminent threat for the species.

"I’m quite worried about the tourism activities at the Komodo National Park, because the tourists are too close to the dragons. It would be much safer if they could observe the Komodo dragons at a safe distance, considering that [the dragons] have venomous bites,” Jatna said.

The government is currently revamping some of the facilities in Rinca Island as part of its efforts to develop the Komodo National Park and the neighboring city of Labuan Bajo, which is located outside of the national park’s boundaries, into a “premium” tourist destination.

Local activists have raised concerns over the potentially harmful impacts of the government projects, which received widespread attention last year after a viral photo showed two construction workers looking on from the top of their truck as they faced a Komodo dragon on Rinca Island. - Jakarta Post/ANN 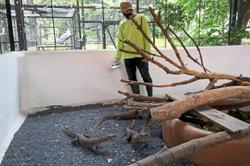