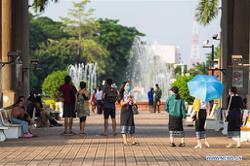 The plan will see the vaccination programme extended to children so that schools can reopen.

Schools throughout Vientiane and in provinces’ red zones have been closed under current lockdowns, which have been imposed after the spread of Covid-19 in local communities.

Authorities will accelerate the vaccination rollout after the lockdown is lifted, according to Prof.Dr Bounfeng, who is also Vice Chairman of the National Taskforce for Covid-19 Prevention and Control.

The immediate target groups include people aged 17 and older as well as women who are at least 12 weeks pregnant.

“In the future, we also plan to inoculate children in the 12-17 age group,” the minister said on Tuesday when addressing the daily news briefing.

In addition, authorities in areas where no cluster outbreaks have occurred will continue to vaccinate target groups in an attempt to achieve the government’s goal to immunise 50 per cent of the adult population by the end of this year.

“Currently, the government is procuring vaccines so that there is sufficient to meet the needs of the target groups,” the minister said.

He called for everyone in the target groups to get vaccinated as soon as possible so that more people are immunised against the deadly virus and its spread is contained.

To expedite the vaccination programme, the minister said authorities plan to open more vaccination centres in the near future in order to reduce crowding, as has happened in the past.

This progress has been made possible due to the assistance and support extended by friendly countries, international organisations and other sectors of society that have stimulated the government’s vaccination programme.