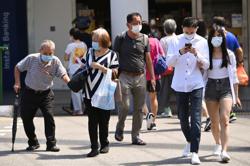 MORE than a year after beating the coronavirus, Singapore’s oldest Covid-19 survivor has died.

Yap Lay Hong (pic) had suffered from intestinal obstruction before she died in the early hours of Sunday, said her second son Alan Ho.

She was warded at Tan Tock Seng Hospital on Sept 12 after she complained of stomach pain.

Ho, 73, said a CT scan was done and the doctors found that her intestines were blocked.

“Surgery was needed, but my family decided not to go ahead with the operation as we were told that the success rate was low and there would still be a lot of suffering after the surgery.

“We opted to put her on a drip in the hope that the blockage would clear on its own. But she passed away early Sunday,” he said.

The then 102-year-old was among the rare centenarians worldwide battling Covid-19 when she tested positive in April last year.

Yap, who became the oldest Singaporean to survive the virus, was among 15 residents and staff at the Lee Ah Mooi Old Age Home in Thomson who contracted the virus. A staff member’s relative was also infected.

Three residents in their 80s and another aged 97 died last year.

Yap is survived by two sons, two daughters, 11 grandchildren and 13 great-grandchildren. Her husband and their eldest child – the oldest son – have died.

Ho said his mother, who was fully vaccinated in April, was still “very lively” when he visited her at the nursing home a week before she was hospitalised. He saw her again last Friday.

“All our family members saw her before her passing. She was always asking for one of her grandsons and he visited her two to three times. She didn’t respond much as she was sedated, but she would open her eyes to see who visited her,” he said.

“In just one week, she was gone. As she was sedated, I think she didn’t feel much pain before she died. It’s a blessing for her.”

Ho said the family celebrated Yap’s birthday every September, but they did not know the exact date she was born. Her identity card shows only her year of birth – 1918.Yap was born in 1918 during the Spanish flu – the world’s worst pandemic – which reportedly killed more than 50 million people worldwide, including 2,800 in Singapore.

“My mother also survived the Second World War and then the Bukit Ho Swee fire in 1961.

“When I was young and we were poor, she would make kuih and cookies to supplement the family’s income,” Ho recalled.

“Despite the hardship, I think my mother lived a full life. She had travelled to more places than me. She had been to Australia, England, China, Japan, Korea, Malaysia.”

Yap moved to the Lee Ah Mooi Old Age Home in 2018 and shared a room with seven others.

A nurse manager at the home, who only wanted to be known as Selvii, 56, described Yap as someone who was fiercely independent.

“She took good care of herself. We will miss her,” she said. — The Straits Times/ANN