Addressing the online Asean Ministerial Dialogue on Accelerating Actions to Achieve the SDGs, the deputy prime minister said that since the adoption of the 2030 Agenda for SDGs in 2015, Laos has made substantial progress.

The poverty rate declined to 18 per cent in 2020, while improvements have been made in food and nutrition security in terms of quality and quantity, resulting in a decrease in malnutrition and underweight in children below the age of five, local daily Vientiane Times reported on Tuesday.

The public health system has also been improved, reflected in part by a decrease in the maternal and under-five mortality rate and an increase in nationwide coverage of health services.

The education sector has also seen achievements, such as an increase in the primary school enrolment rate and the literacy rate in people aged 15 and above.

"On the gender equality agenda, we are witnessing tangible outcomes which can be demonstrated by the issuance of gender equality promotion policies in line with the principles and aspirations of the regional and international cooperation framework," Sonexay, who is also Minister of Planning and Investment, told the meeting.

"Such endeavours aim to protect and promote opportunities for women's participation in socio-economic development."

At the same time, Laos attaches importance to sustainable environmental protection by implementing the Paris Agreement on Climate Change and collaborating with all stakeholders within and outside the country in addressing climate change and reducing greenhouse gas emissions.

These include the adoption of the National Green Growth Strategy in 2019 with a view to complementing the long-term Sustainable Development Vision.

The achievements were made as Laos concluded the eighth five-year National Socio-Economic Development Plan (NSEDP) for 2016-2020 last year, which incorporated the SDGs.

However, the deputy prime minister said that many issues and challenges remain, particularly those posed by the COVID-19 outbreak and climate change inhibiting development.

In a determined attempt to fulfil the set objectives of the five-year plan, Laos recently adopted two national agendas to address economic and financial vulnerabilities and tackle the drug problem.

Sonexay also encouraged the collective role and collaboration of relevant organizations in all Asean member states to contribute to development through mutual support and regular high-level exchanges. - Xinhua 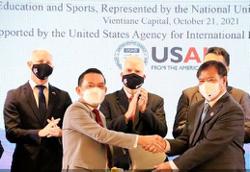