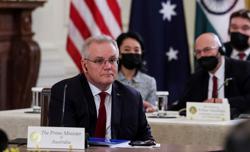 US President Joe Biden watches as Australian Prime Minister Scott Morrison speaks virtually on national security in the East Room of the White House in Washington, DC, on Sept 15, 2021. - AFP

JAKARTA (The Jakarta Post/Asia News Network): Australia’s newly unveiled defence pact with the United Kingdom and the United States is expected to heighten tensions in the Indo-Pacific, with Indonesia and other countries finding themselves caught in the middle of an arms race between Western allies and China.

Canberra will get US cruise missiles and a fleet of nuclear-powered submarines as part of the new agreement, dubbed AUKUS, which has angered Beijing and worried nuclear non-proliferation activists and regional diplomats.

US President Joe Biden and Australian Prime Minister Scott Morrison announced the partnership on Thursday (Sept 16), to the surprise of many countries.

Morrison said the three nations respected “freedom” and “the rule of law” and that the alliance would help ensure security in the region. Western allies often reference the rule of law and freedom when voicing opposition to China’s military buildup in the South China Sea, AFP reported.

But UK Prime Minister Boris Johnson said the move was “not intended to be adversarial toward any other power”, after China branded the deal a “threat to regional stability”.

Morrison will join Biden again on Sept 24, this time in person, at the first White House gathering of the Quad diplomatic group, consisting of Australia, India, Japan and the US.

In South-East Asia, a core theatre for the US-China rivalry, the Quad has served as an extension of the US Indo-Pacific strategy, which seeks to contain China’s growing influence in the region.

Washington has repeatedly tried to reassure Asean countries that they will not be forced to choose a side, but the recent announcement has put the region on edge.

Since the announcement, Canberra’s leader has sought to speak with several foreign counterparts on the matter, including with President Joko “Jokowi” Widodo.

In a statement published on its website early on Friday, the Foreign Ministry said that Indonesia has cautiously taken note of Australia’s decision to acquire the submarines and stressed the importance of the country’s commitment to continue meeting its nuclear nonproliferation obligations.

“Indonesia is deeply concerned over the continuing arms race and power projection in the region,” it said.

Indonesian foreign policy scholar Dewi Fortuna Anwar said relations with Australia were in a very good state following last week’s foreign and defence ministerial meetings, but added that Canberra should still be forthcoming about its intentions.

“I think every country has the right to increase its defence equipment capacity. Indonesia itself has its own ambitions to have [such] a submarine, so it is nothing new. The important thing is transparency, to provide reassurance and not create a security dilemma,” she told the Post on Thursday.

Dewi said Australia should consult Indonesia on where it would operate the new submarines because of the neighbours’ proximity.

“Indonesia will surely be disturbed if they suddenly appear in the Lombok Strait without permission,” she said, adding that the move showed that countries were increasingly threatened by the rise of China.

Canberra has surprised Indonesia in the past, at times to the detriment of the bilateral relationship. Its announcement in 2018 that it would relocate the Australian embassy in Israel to the contested city of Jerusalem irked Jakarta, while its 2011 surprise decision to open a US military base in Darwin was widely considered a diplomatic faux pas.

As an island country that bridges the Indian and Pacific oceans, Indonesia oversees a number of archipelagic sea lanes (ALKI) through which foreign vessels can seek passage.

More nuclear submarines would be a cause for concern for Jakarta.

The leaders of AUKUS said the submarines would not be nuclear-armed and would only be nuclear-powered. But the vessels will allow the Australian military to travel – and strike targets – far from its coast, AFP reported.

While Australia may not be in violation of the nuclear nonproliferation acts it has signed, including the Non-Proliferation Treaty (NPT) and the Rarotonga Treaty, the alliance with Canberra marks the second time ever the US has helped another country build a nuclear fleet.

The move has worried Asean diplomats, who have sought to create a nuclear-free region through the Treaty of Amity and Cooperation (TAC), which Asean dialogue partners must sign as a prerequisite for establishing a partnership with the bloc.

Australia, the US and the UK have all signed the treaty.

The Foreign Ministry said Indonesia calls on Australia to maintain its commitment towards regional peace, stability and security in accordance with the TAC, while encouraging it and other parties to “advance dialogue in settling any differences peacefully”.

Mutti Anggita, lead analyst for security and women at the Laboratorium 2045 think tank, said the unexpected announcement could still make countries in the region uncomfortable, even if the submarines did not violate nonproliferation acts.

It was “quite reasonable” for other countries in the region to be worried and oppose the move, she said, because it could indicate Australia’s first step toward the development of nuclear weapons.

“The presence of nuclear submarines in Australia puts Australia, its neighbours and the Asia-Pacific region at risk of becoming a nuclear accident site, whose impact can be as devastating as the impact of a nuclear weapon explosion,” Mutti told the Post on Thursday.

Muhadi Sugiono, a campaigner for the Nobel Peace Prize-winning International Campaign to Abolish Nuclear Weapons (ICAN), expressed dismay over the procurement, saying the deal was made as the world was moving away from nuclear weapons.

“Although the Australian government insists that the submarine is not nuclear-armed, this decision has clearly sent the wrong message at the wrong time. The possession of these nuclear submarines and the presence of a military nuclear reactor being built in Adelaide indicate the increasing nuclearization of Australian military forces and the potential for nuclear weapons proliferation in Australia,” he said. 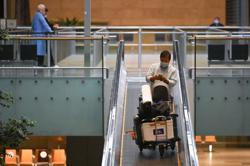