The European Union announced details of its long-awaited Indo-Pacific strategy on Thursday, at an event that was completely overshadowed by a new US-backed security alliance aimed at countering China.

The strategy calls for the EU to increase its naval presence in the region through port calls and freedom of navigation exercises in a bid to “promote an open and rules-based regional security architecture”.

But at a press conference in Brussels, top EU diplomat Josep Borrell was instead peppered with questions about the “Aukus” security pact between the US, Britain and Australia announced on Wednesday, which sent shock waves through European capitals.

The agreement saw Canberra cancel a US$90 billion deal with France to build a new submarine fleet, infuriating Paris.

Borrell said he had no idea the plan was in the works, but moved to dampen talk that it put more pressure on an already strained relationship with Washington.

“We’ve only just been made aware of it and weren’t even consulted. I certainly, as the high representative for security policy at the European Union, I was not aware. And I assume that an agreement of such a nature wasn’t just brought together overnight, I think it would have been worked on for quite a while,” Borrell said, suggesting that Aukus proved the “timeliness” of the EU’s own Indo-Pacific policy.

Borrell “regretted” not being part of the arrangement, but said the effect on EU-US relations should not be “dramatised”. Nor would Australia’s seeming breach of a supply contract with France hamper negotiations over a trade deal with the EU, Borrell said.

“We want to foster cooperation with countries such as Australia, we are not taking ad hoc action motivated by individual events such as the ones we may have heard today,” he said. “Trade agreements with Australia will continue down their path.”

The EU’s strategy is designed to protect its interests – with 40 per cent of the bloc’s trade passing through the South China Sea – but also promote values such as democracy and human rights.

The policy communique said the “display of force and increasing tensions in regional hotspots such as in the South and East China Sea and in the Taiwan Strait may have a direct impact on European security and prosperity”.

It is part of a “multifaceted engagement with China”, through which the EU will engage on issues like climate change and biodiversity, but “push back where fundamental disagreements exist with China, such as on human rights”, it reads. 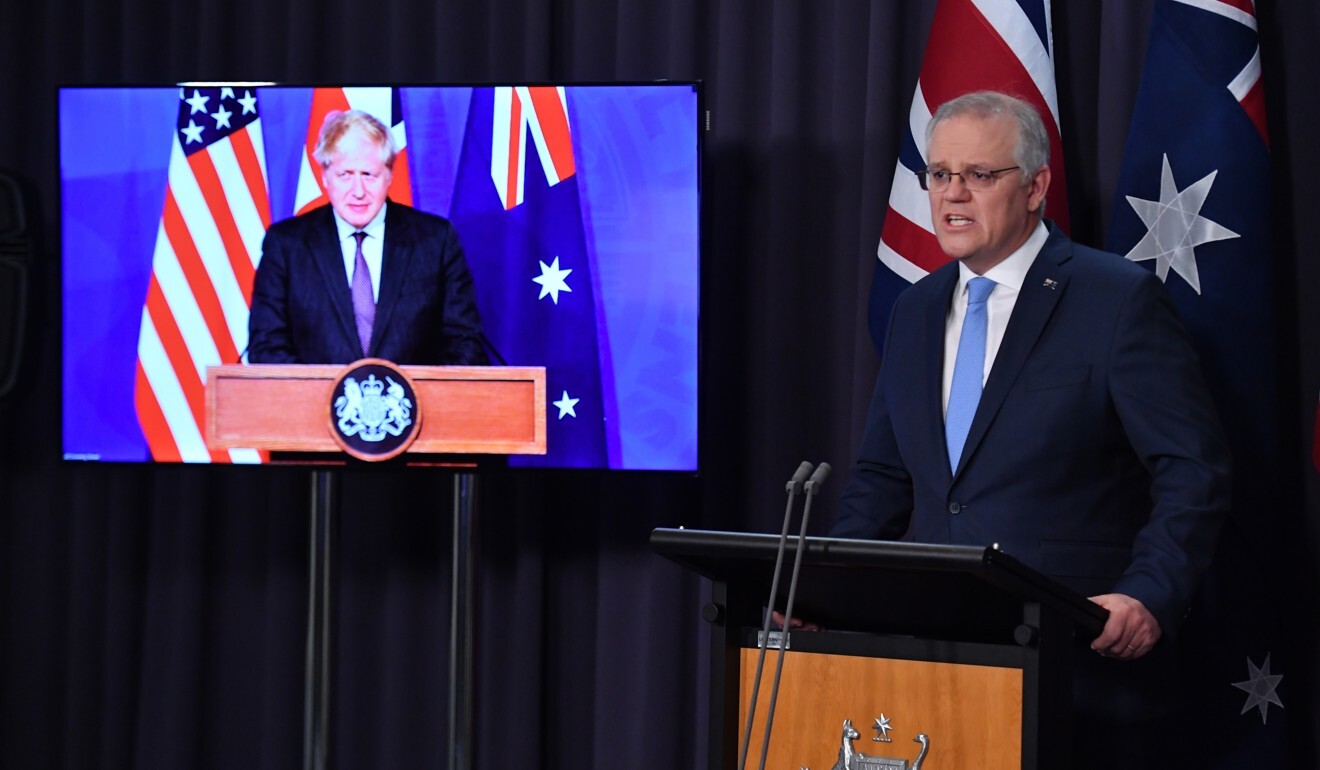 Said Borrell: “Our strategy is inclusive, it’s open to all our partners in the region. We wish to cooperate, from East Africa to the Pacific, and this includes China. On many areas, such as climate and biodiversity, China’s cooperation is essential. Our strategy is one of cooperation not confrontation.”

But analysts said the EU’s position was being eclipsed both by events and by divisions within the union on exactly how active it should be in the Indo-Pacific.

France, for example, favours a more forceful role, while Germany is more reluctant.

“I think European nations, and especially Germany, will not contribute too much,” Nils Schmid, the foreign affairs spokesman for the German Social Democratic Party, which is leading in the country’s election polls, said last week. The schism undermines the broader EU-wide drive to hold together a unified plan, said Hans Kundnani, director of the Europe programme at Chatham House, a British think tank.

“The EU’s strategic autonomy position is becoming less relevant day by day,” he said, adding that there was more likelihood of a solid strategy emerging on a pan-European basis, including Britain.

“Europeans so far have not been highly consistent in showing anything beyond rhetoric solidarity with countries challenged by Chinese coercion. This is about more than a deal on submarines. The real question is whether a US-led pushback on the security side against China in the Indo-Pacific region is in Europe’s strategic interest – or not,” she said.

“If it is, then Aukus might be a valuable component of this strategy and could be complemented by Europe’s Indo-Pacific push. If it is not, then Europe will have to come up with its own answers to credibly support regional partners – and do so quickly,” Oertel added.

Earlier on Thursday, French Foreign Minister Jean-Yves Le Drian said the Aukus alliance was a “stab in the back” for Paris, which “had established a trusting relationship with Australia, and this trust was betrayed”.

“I am today very angry and very bitter about this break-up,” said Le Drian, who likened the move to “what [former president Donald] Trump used to do”.

“This is not acceptable between allies,” the French minister said. “Especially when there was first a two-year negotiation for this contract, which began in 2014 and was completed in 2016.”

White House spokeswoman Jen Psaki dismissed the comparison to Trump, and said Biden was focused on achieving “global objectives, which include security in the Indo-Pacific.”

Fielding questions about France’s absence from the new pact, Psaki stressed that the alliance was “not the only global engagement or only global cooperative partnership the United States has in the world,” pointing to the G7 and G20 blocs, of which France is also a member.

“[France’s] leadership up and down the ranks will continue to be important partners to the United States and to this administration moving forward,” she said.

As part the 240th anniv. of the Battle of the Capes, we welcome destroyer Aquitaine on U.S. shores. She will be in U.S. waters as part of operational activities in the Atlantic, and her visit will be accompanied by meetings between & Navy officials. pic.twitter.com/YYT3FPBWSg

Amid the fallout from Wednesday’s announcement, French officials cancelled a gala planned in their embassy in Washington that was to celebrate the anniversary of a decisive naval battle, won by the French fleet, that aided the Americans during their revolution, news outlets reported.

In Europe, a French member of the European parliament threatened to stall negotiations of a new trade deal between the EU and Australia.

“Considering how they behave with a European ally that was the most committed to build a lasting, strategic partnership in Indo-Pacific, Australians can expect more than a delay in concluding the Free Trade Agreement with [the] EU!” the MEP, Arnaud Danjean, tweeted.