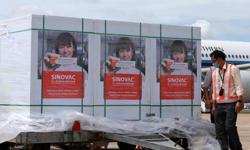 A young boy reacts as he receives a shot of the Sinovac's Covid-19 vaccine at a Samrong Krom health center outside Phnom Penh, Cambodia, Friday, Sept. 17, 2021. Prime Minister Hun Sen announced the start of a nationwide campaign to give Covid-19 vaccinations to children between the ages of 6 and 11 so they can return to school safely after a long absence due to measures taken against the spread of the coronavirus. - AP

PHNOM PENH, Sept 18 (AFP): Cambodia on Friday (Sept 17) began inoculating children as young as six against coronavirus, even though the World Health Organisation has yet to approve a vaccine for the under-12s.

The South-East Asian country has won praise for its swift vaccination programme, which has seen more than 98 percent of the adult population receive at least one dose, according to the health ministry.

The latest phase of the drive began with the grandchildren of Prime Minister Hun Sen and other officials receiving a Sinovac shot in front of reporters in Phnom Penh.

"It is necessary for us to do this because we have to step ahead," Hun Sen said.

Cambodia plans to give children aged six to 12 two shots of the Chinese-made vaccine, with a third booster dose later.

Sinovac has been approved for adult use in more than 50 countries but China has cleared it for use in children.

But health experts are not yet sure about the advisability of vaccinating younger children.

The World Health Organisation has urged countries to hold off jabbing those under 12.

"More evidence is needed on the use of the different COVID-19 vaccines in children to be able to make general recommendations," the UN health agency said.

A global study on the effectiveness of the Sinovac shot on youngsters aged between six months and 17 years was launched last week.

The research will involve 14,000 children and teenagers in South Africa, Chile, Kenya, Malaysia and the Philippines.

But Hun Sen, the strongman leader who has ruled Cambodia for over three decades, dismissed safety concerns.

"Cambodia has its duty to protect the lives of its people and has a duty to reopen the economy, including education," he said.

After Singapore, Cambodia has ranked second for the speed of its vaccination programme in South East Asia.

The country has inoculated roughly 72 per cent of its 16 million population with two doses, putting it well ahead of larger, wealthier neighbours Thailand and Vietnam.

A report by the Mekong Strategic Partners consultancy attributed the success to a strategy based on location rather than age cohorts, low vaccine hesitancy, compulsory jabs for public officials and a broad-based approach to procurement.

The lion's share of Cambodia's jabs have come from China -- Sinovac and Sinopharm -- but the country is also using some UK developed AstraZeneca and American Johnson & Johnson doses.

Schools in some lower-risk parts of the country reopened this week and Hun Sen said a pilot scheme to reopen the borders to tourists was under consideration.

Visitors would be exempt from a 14-day hotel quarantine but would have to stay in particular provinces for at least seven days. - AFP