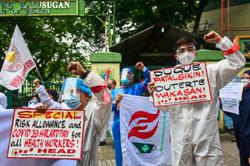 A nurse and a hospital worker attending to a patient outside a hospital in Binan, Laguna province south of Manila in a photo taken on Sept 6, 2021. - AFP

Manila, Sept 18, 2021 (AFP) - Exhausted nurses in the Philippines are struggling to care for patients as colleagues contract Covid-19 or quit a profession that was dangerously understaffed even before the pandemic.

The country is enduring a record rise in infections, fuelled by the Delta variant, with the health department reporting a nursing shortfall of more than 100,000 -- forcing those left to work long hours for little pay on often precarious short-term contracts.

"They are tired and burned out," nursing director Lourdes Banaga, at a private hospital south of Manila, told AFP.

"At the start of the pandemic we had almost 200 nurses," said Banaga, director for nursing services at the Lipa Medix Medical Center in Batangas province.

"By September that will reduce to 63."

The pandemic has exacerbated a pre-existing lack of nurses, said Maristela Abenojar, president of Filipino Nurses United -- a situation she describes as "ironic" in one of the world's biggest exporters of healthcare workers.

The "chronic understaffing" is down to inadequate salaries, she said.

But Abenojar said most were on short-term contracts, earning 22,000 pesos with no benefits such as hazard pay. Meanwhile, those in the private sector were making as little as 8,000 pesos.

And many have had enough: About 40 percent of private hospital nurses have resigned since the start of the pandemic, according to the Private Hospitals Association of the Philippines.

More than 5,000 nurses have been given the green light to go abroad this year after a Covid-19 ban was replaced with a cap to ensure enough nurses were available in the Philippines.

"We can't get additional nurses, we can't compel them to apply," said Jose Rene de Grano of the private hospitals association. 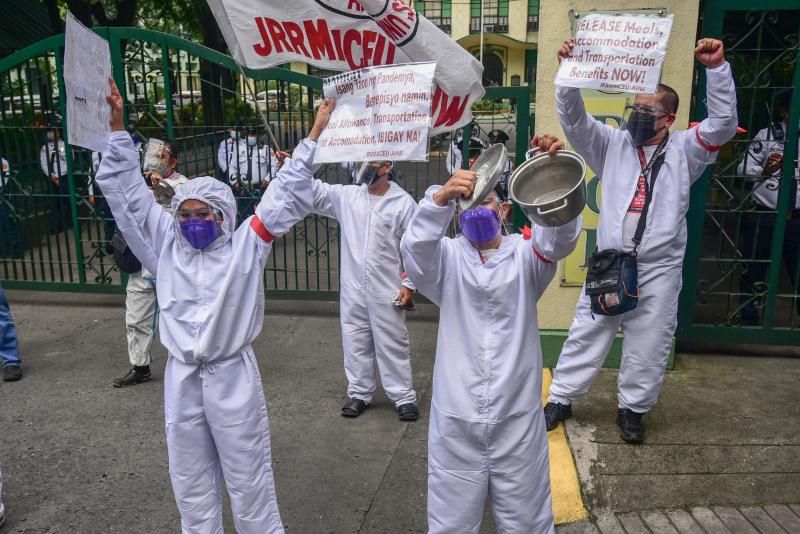 This photo taken on Sept 1, 2021 shows health workers staging a protest to ask the government for hazard pay and benefits, outside the Department of Health office in Manila. - AFP

In recent weeks, health workers have protested over unpaid benefits, including a coronavirus special risk allowance. Abenojar said many were still waiting.

President Rodrigo Duterte has asked for patience while the government tries to come up with the money.

"We don't feel cared for," said Melbert Reyes of the Philippine Nurses Association.

Many hospitals boosted their bed capacity after a virus surge earlier this year threatened to overwhelm them.

A public hospital in Binan city, near Manila, turned a car park into a ward.

"Many of our nurses are sick and in quarantine," medical director Melbril Alonte told AFP.

"We feel exhausted... but we always keep in mind that we have to help our people because... no one else will."

But due to the nursing shortfall, some facilities -- like the Lipa Medix Medical Center -- have had to slash their bed capacity, and extend their nurses' shifts.

Nurse Trixia Bautista said she works up to 15 hours per shift looking after mostly severe Covid-19 patients at a public referral hospital in the capital.

At times, she has cared for as many as 30 patients on her own after nurses on her ward quit or got sick.

"Physically it's very tiring," she said. "There's not enough people to cater to all these patients." Health workers staging a protest to ask the government for hazard pay and benefits, outside the Department of Health office in Manila. - AFP

But there are plenty of qualified nurses in the Philippines, said Abenojar of Filipino Nurses United.

Many healthcare workers enter the profession to try to secure better-paid jobs abroad, but the shortage is not due to overseas migration.

"It's because nurses have left the profession," said Yasmin Ortiga, assistant professor of sociology at Singapore Management University, pointing to the dearth of stable jobs and dismal wages.

A proliferation of nursing programmes led to an oversupply, with many unable to get a permanent position in a local hospital -- necessary to work abroad -- and subsequently a drop in enrolments.

Ortiga said: "People realised that if I am unable to leave the country it's really not worth being a nurse at home." - AFP
Article type: metered
User Type: anonymous web
User Status:
Campaign ID: 46
Cxense type: free
User access status: 3
Join our Telegram channel to get our Evening Alerts and breaking news highlights 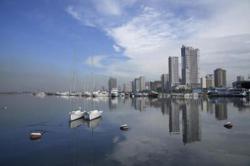