Highrises of office buildings are silhouetted by the afternoon sun at Raffles Place financial business district in Singapore on August 5, 2021. - AFP

SINGAPORE, Aug 7 (Bloomberg): The delta variant is challenging the part of the world that’s been most successful in blunting the economic impact of Covid-19, with Asian countries that snuffed it out locking down again as the virus returns, and others seeing the world’s highest death rates.

Just 12 months ago, the Asia-Pacific region’s rapid containment of Covid-19 made them the envy of the world as the virus ravaged the US and Europe.

Now, from Seoul to Sydney, Bangkok to Beijing, authorities are reimposing growth-sapping restrictions as low vaccination rates in many of those places leave their populations vulnerable.

So far, it’s consumers who are bearing the brunt. The central bank in Australia, where two-thirds of the population are confined at home after delta slipped through the strict travel quarantine system, estimates spending drops about 15% during lockdowns.

China is imposing internal travel and movement restrictions in the middle of the summer break as infections return to places like Wuhan and Beijing, prompting reductions in forecasts for growth in the world’s second-biggest economy. Cases there jumped to a six-month high on Friday of 101 infections, with delta reaching regions that account for 38% of national gross domestic product.

Supply chains from Vietnam to Thailand, where outbreaks are surging, have also been interrupted, with factories that make goods for Nike Inc. and Adidas AG shutting down over virus restrictions, potentially missing out on the crucial holiday shopping season. That raises the prospect of Asia’s delta hit reverberating worldwide, if exports are delayed longer term.

The deterioration in outlook, both for virus containment and economic growth, is in contrast to western economies like the U.K. where high vaccination rates are blunting the impact of delta and travel reopening is progressing.

There’s a common theme among many Asia-Pacific economies that enjoyed early success with limiting the virus’s damage: complacency. With fatalities low, authorities in South Korea, Japan, Australia and New Zealand are among those whose vaccine rollouts lagged behind; their inoculation rates are now in the bottom 10 among the 38 OECD member states.

All except New Zealand have been hit by delta, with infections over the last month surging roughly threefold in South Korea, quadrupling in Japan and climbing 642% in Australia. 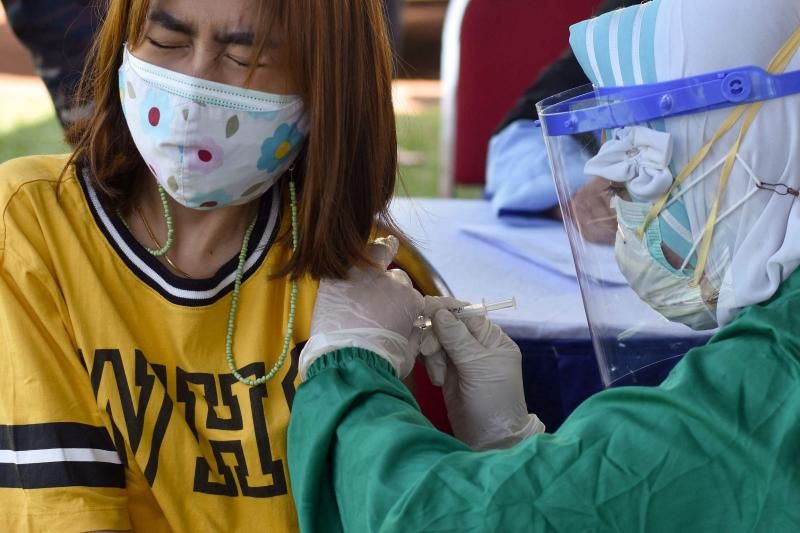 Japan’s Olympics -- meant to be an economic bonanza -- turned bust as spectators were kept out amid yet another state of emergency imposed in Tokyo and elsewhere. While there has been no spread of the virus among mostly vaccinated global athletes, delta has surged through the local population outside of the Olympic Village, pushing cases to a record of 5,042 in the capital on Thursday.

In a sign of frustration over the stop-start cycle of emergency, Japanese are paying less attention to calls for caution with foot traffic at train stations up and many bars and restaurants openly flouting government requests to close early.

Japan recently earned the dubious distinction of being one of only two advanced economies to have its growth outlook cut by the International Monetary Fund. Asia’s largest retailer, Uniqlo operator Fast Retailing Co., lowered its full-year operating profit outlook in July partly due to Japan’s Covid restrictions and those in other Asian markets.

Across the East China Sea, China’s delta outbreak is intensifying economic risks in the second half, coming after a deadly flood and softness in exports and investment. Social distancing measures will likely weigh on a fragile recovery in retail spending during the peak summer holiday period. Airlines’ seating capacity in China has declined 10% from the previous week, and travel booking sites reported a surge in cancellations.

"We have no customers at all because no one is allowed to move around freely anymore,” said a sales manager surnamed Xie who works at a hotel in Zhangjiajie, a tourist destination in central China’s Hunan province where delta has flared. The 30-room hotel usually rakes in 2 million yuan ($309,000) in monthly sales during the summer holidays, but business has ground to a halt since authorities closed tourist locations on July 30.

"July and August were supposed to be the busiest months for us. There’s nothing we can do but to wait and tough it out,” he said.

Visitation in Macau, the Chinese territory that’s the world’s biggest gaming hub, is also set to tumble after the first cluster of local cases there in more than a year.

Over in South Korea -- where just 14% of the population has been fully vaccinated -- about 30% of its 205,000 cases came in the past two months alone. The worst spike since the pandemic began forced President Moon Jae-in to put Seoul under semi-lockdown, banning gatherings of more than two people after 6p,.

Yet the Bank of Korea insists the recovery is still on track. It’s a similar story down in Australia, where the central bank is sticking to plans to taper weekly bond purchases even as it acknowledges GDP is all but certain to contract this quarter.

In part, this reflects lags in monetary policy, but it’s also the experience of past lockdowns, when economies bounced back quickly.

Still, the delta variant has been altering calculations and its highly contagious nature may leave a longer-tail impact on places that overcame previous waves.

South-East Asia is now emerging as one of the world’s worst hit regions, recently overtaking Latin America with the highest weekly death rate. At the epicenter is Indonesia, where the death toll this week surged past 100,000, though President Joko Widodo is resisting stricter movement curbs that would further dent the region’s biggest economy.

The debate over whether to lock down is particularly fraught in Thailand, as well as neighboring Vietnam, as trade has been one of the few economic bright spots. The Federation of Thai Industries recently warned that quarantines and mobility restrictions are causing labor shortages, forcing companies to cut production.

The disruption is being felt by American retailers, who are growingly concerned that their shelves may not be fully stocked for the peak holiday shopping season. The American Apparel & Footwear Association’s Chief Executive Steve Lamar has asked U.S. President Joe Biden to "immediately ramp up distribution of excess U.S. vaccines to Vietnam and other key partner countries” including Bangladesh and Indonesia.

Over in India, where the delta strain was first identified last year, a deadly second wave that left millions jobless and thousands dead has been ebbing. But the fallout is substantial: the IMF last month slashed its forecast for the year to March 2022 to 9.5%, from 12.5% just three months earlier.

Then there’s Singapore, the prosperous city-state at the heart of the Southeast Asian region. It has struggled to make a planned transition from low cases and strict safety protocols to a "new normal” where Covid-19 is endemic as long as hospitalizations and deaths are limited.

A recent rise in delta infections forced the government to pull back and re-impose restrictions, though it’s now pledged to reopen in September, when vaccination among the population reaches a very high level.

"Our calculation of existing levels of vaccine, vaccine availability and run rate show that Singapore will be the first to reach the threshold of 80%,” said Alicia Garcia Herrero, chief economist for Asia Pacific at Natixis. "This means that it will be the first to exit in Asia.”