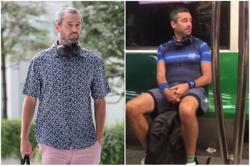 A man captured on video not wearing a mask on an MRT train in May told a district court that he was “sovereign”, adding that “the charges don’t apply to me”.

The unrepresented Briton also said he had a “legal counsel”, pointing to a man at the court.

The man, identified as Abdul Rashid Abdul Rahman, had been his bailor.

Deputy public prosecutor Timotheus Koh told the court that Abdul Rashid was not a lawyer at the Supreme Court of Singapore.

Addressing the court, Abdul Rashid said he was an “ambassador-at-large and advocate of Kingdom Filipina Hacienda”.

He said he was there to defend his “sovereign compatriot”, adding that he didn’t need a licence to practise.

However, District Judge Eddy Tham said Abdul Rashid could not represent anybody in Singapore as he had not been called to the bar here.

Koh also urged the court to have Glynn assessed to ensure that he was of sound mind and capable of defending himself in court.

He added that the Briton’s family and friends had written in, stating that there had been a marked change in his behaviour after Covid-19 restrictions were rolled out in Singapore.

Objecting to the application, Glynn loudly exclaimed: “My mind is crystal clear.. I’m wide aware. I’m enlightened... Just because I refuse to be a slave, you accuse me of being a lunatic.”

He added that he had spent “hundreds of hours” studying the law and said he knew legal matters better than Koh.

Stressing that he had been “kidnapped and abducted” against his will, Glynn also said he had been “tortured physically and psychologically”.

He urged the court to drop the case and give him back his passport so that he could return to his family in Britain.

After hearing both sides, Tham said there was reason to suspect that Glynn could be of unsound mind and ordered him to be remanded at the Institute of Mental Health for psychiatric observation.

The trial will resume on Aug 19.

Unhappy with the decision, Glynn lashed out at the court and exclaimed: “I’m disgusted with how the Singapore judicial system has treated me.”

Glynn faces two charges under the Covid-19 (Temporary Measures) Act, as well as one count each of harassment and being a public nuisance.

He allegedly failed to wear a mask while travelling on an MRT train from Raffles Place station to Holland Village station on May 7.

He is then said to have caused annoyance to the public during the trip by declaring: “I will never wear a mask.” 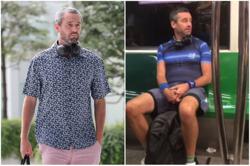