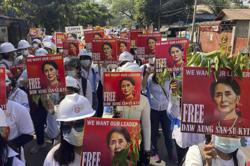 LOS ANGELES (Variety.com): Myanmar director Maung Sun says he fears for the future of his writing and producing partner Ma Aeint who now faces charges brought by the military junta.

Ma Aeint was arrested in early June in Yangon and was held for a month in judicial detention. She has since been transferred to the notorious Insein Prison, where she is being treated as a political prisoner.

Maung Sun was recently able to travel from Myanmar to Europe where he is attending the Residence component of the Cannes Film Festival's Cinefondation training and development program. He is now in Switzerland, where "Money Has Four Legs" is to be screened at the Locarno Film Festival.

Ma Aeint and Maung Sun jointly wrote the film about a filmmaker facing up to the realities of making a debut film and facing down the censorship authorities. Maung Sun directed the picture, with Ma Aeint directing.

The film debuted last year at the Busan International Film Festival and played recently at the Udine Far East Film Festival. It is also due to screen later this month at the New York Asian Film Festival.

"It will be my first time to attend an in-person screening of my film," Maung Sun told Variety. But he said that he was disappointed not to be able to share the experience with Ma Aeint.

He explained that Ma Aeint is to be charged under the recently-amended section 505A of Myanmar's Penal Code. The law allows for a three-year prison sentence for "causing fear, spreading fake news or agitating against government employees."

Ma Aeint was due to have appeared in court on July 30, but the hearing was delayed due to COVID-19 restrictions. "I don't know why she is being charged," Maung Sun said.

It is not clear whether Ma Aeint has been tortured. But even under normal conditions being detained in Insein Prison itself is harsh treatment. The New York Times called it "a monument to brutality and authoritarian rule" where its official capacity of 5,000 inmates has been almost doubled by a wave of political detainees. Now coronavirus is sweeping through the overcrowded facility.

"There were multiple cases of Covid within the prison and a few people died. Ma Aeint has tested negative and is still in good health, according to the last letter her family received," Maung Sun said.

Myanmar's military allowed a degree of civilian rule introduced in 2011, but behind the scenes retained most of the levers of power. The military retook full control of the country on Feb. 1 this year after declaring that parliamentary elections held in November 2020 were rigged. Aung Sang Suu Kyi's National League for Democracy had roundly defeated the military's political proxies and obtained 83% of the vote.

Aung San Suu Kyi, president U Win Myint, cabinet ministers, the chief ministers of several regions, and opposition politicians were all rounded up. Since then, writers and activists have been targeted and several hundred protestors have been shot and killed.

On Sunday, the military junta's leader, Senior General Min Aung Hlaing, said that a national state of emergency would be extended for a further two years. The junta also announced the establishment of a caretaker government with Min Aung Hlaing as prime minister. 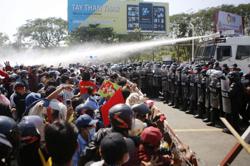