A woman is receiving the Sinovac Covid-19 vaccine for Covid-19 at a vaccination centre in Bandung on August 2, 2021. - AFP

JAKARTA, Aug. 2 (Xinhua/Jakarta Post-ANN): Indonesia on Monday has decided to extend its restrictions on community activities, known locally as PPKM, in several regions until Aug 9 as the country is still fighting the second Covid-19 wave that has overwhelmed hospitals.

Initially, the government imposed the policy, previously called PPKM Darurat (emergency community restrictions) on the country's most populated Island of Java and the resort island of Bali from July 3 to 20.

The PPKM Darurat was later expanded to some regions that saw surges in new cases until Aug. 2, and the name of the policy was changed to PPKM Level 4, requiring workers in non-essential sectors to work from home and shopping malls to temporarily close.

"Taking into account the development of several indicators of cases this week, the government has decided to continue PPKM Level 4 from Aug. 3 to 9, 2021 in some particular districts and cities," President Joko Widodo said at a virtual press conference on Monday evening.

During the past 24 hours, 32,807 recovered patients were discharged from hospitals, raising the total number of recoveries in the Southeast Asian country to 2.84 million, according to the ministry.

Meanwhile, the government has started administering a third Covid-19 shot to health workers following the deaths of hundreds of frontlines in the past two months, many of whom had been fully vaccinated, due to the spread of the more contagious Delta variant.

Most had received the Chinese Sinovac vaccine for their first and second doses.

The campaign is scheduled to begin this week in other regions, with the government aiming to give the booster shots to some 1.5 million medical workers within the next two weeks.

"We have sent (1.5 million doses of the Moderna vaccine) to all provinces of Indonesia. I have instructed all regional health agencies so that this can be done in two weeks’ time,” Health Minister Budi Gunadi Sadikin said on Monday.

His target was more optimistic than the 45 days targeted for completing the program previously suggested by a Health Ministry official and the government spokesperson for Covid-19 vaccine affairs Siti Nadia Tarmizi. 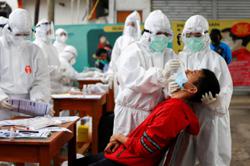