In a statement posted on its website on Thursday (July 29), the embassy said Austin had interfered in China's internal affairs by referring to matters relating to Taiwan and Xinjiang.

It said he also played up the "so-called China threat" in an attempt to drive a wedge between China and its neighbours.

Austin, who was in Singapore earlier this week for his first visit in his current appointment, had delivered a lecture on Tuesday at an event hosted by the International Institute for Strategic Studies, a research institute.

In his speech The Imperative Of Partnership, Austin addressed the ways in which the US will work with its allies and partners in the region to rebuild from the Covid-19 pandemic.

He also spoke on China, saying it had acted in ways that are contrary to principles shared in the region - including freedom of the seas; devotion to human rights, dignity, and decency; and an insistence on disputes to be solved peacefully.

Austin also maintained that Beijing's claim to the vast majority of the South China Sea has no basis in international law.

He highlighted "destabilising military activity and other forms of coercion against the people of Taiwan", and "genocide and crimes against humanity against Uighur Muslims in Xinjiang".

But Austin added that the US is committed to pursuing a stable and constructive relationship with Beijing. He was speaking at the 40th Fullerton Lecture attended by defence officials and academics.

On his allegations that China had committed genocide and crimes against humanity against Uighur Muslims in Xinjiang, the embassy said this was a smear against China for "purely political purposes".

Xinjiang has seen its Uighur population and their life expectancy doubled over the years, it said, and they are getting wealthier and more educated.

Despite this, the Chinese Embassy said the US has "never ceased to support and incite violent and religious extremist forces in Xinjiang with the intention of disrupting Xinjiang and containing China".

In his speech at the Fullerton Hotel, Austin said the US is working with Taiwan to increase its readiness to deter threats and coercion, which upholds its commitments under the Taiwan Relations Act and is consistent with the US' one China policy.

But the Chinese embassy said the US is now blatantly reneging on its political commitment made in three China-US joint communiques decades ago, and backtracking on its position.

"Austin's claim to use the 'One China Policy of the United States' to deal with the Taiwan issue is both deceptive and arrogant. There is only one China in the world, and the One China policy has only one standard and one bottom line," it said.

The embassy also said his remarks on the South China Sea and China-India relations were made to sow discord between China and its neighbours.

While there are overlapping claims of territorial integrity and maritime rights between China and several Asean countries in the South China Sea, it said China and the countries involved have effectively managed differences through dialogue and consultation.

The Chinese Embassy noted that China and Asean countries have made active efforts to advance consultations on the Code of Conduct in the South China Sea.

"It is the interference and meddling of the US that have made many regional issues worse," it said.

"China and its neighbours have the capability and wisdom to handle differences through friendly consultations, and surely do not need the US pointing fingers."

It added that "repeated and groundless attacks against China by the US are nothing but provocations".

"It is our sincere wish that the US could put aside its arrogance and prejudice, stop acting as a preacher, and participate in regional cooperation in a more humble manner.

"We dare not entertain hopes that the US would contribute positively to regional prosperity, but we certainly will not allow the US to stir up troubles in the region," the Chinese Embassy said. - The Straits Times/Asia News Network 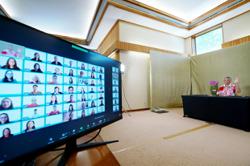